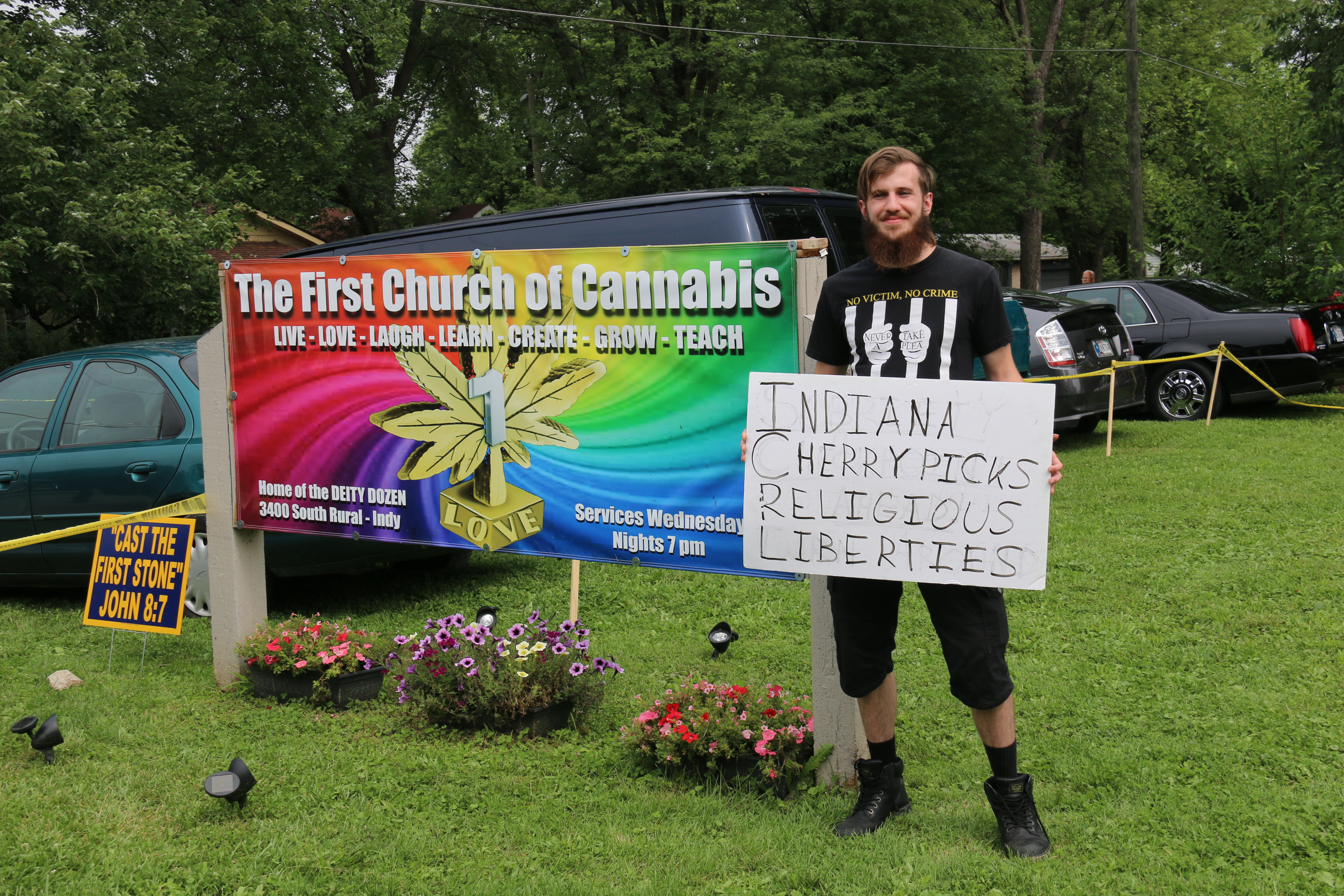 Yesterday Val (of Columbus CopBlock), Ben (of Beavercreek CopBlock), Micah (of Yellow Springs CopBlock & Counter Current News) and myself headed to Indianapolis to attend an event at The First Church of Cannabis. Though all of us listed above support property rights, where property owners make the decisions – like leaving on or taking off shoes your shoes – on their property , and self-ownership, where the individual owns themselves and therefore decide what is right/wrong to put into their bodies, we all attended the event to provide another form of support; COPBLOCKING.

When we arrived at the church around 10:30 am the police presence was in full force, so we linked up with our kick ass local hosts, the Bulletproof and the Fool’s Crew, and got to work. For nearly three or four blocks in each direction any number of police (from 1 – 6) were stationed on intersections, driveways and around the church itself. They weren’t in riot gear, nor did they carry excess zip ties and I didn’t see a single bearcat but I did see an absurd number of police. One witness even told me that I had just missed the police installing a camera on a telephone pole directly across the street from church property. One would have thought that our group was in the midst of a police exercise or a gang war. Yet, we were simply walking up to a church. It didn’t take long for someone on church grounds to notice us wearing CopBlock gear and yell, “CopBlock, over here!” After that it, was one interaction after another and of all varieties. In the beginning, we wandered around the church grounds, to not only get a feel for the area, but to handout CopBlock flyers and stickers to those in attendance. Inside the grounds, everyone was receptive to the idea that “Badges Don’t Grant Extra Rights” and accepted our handouts. Many thanked us for being there, stated they were already fans of the website (or Facebook Page) and sought suggestions on how to handle the situation at hand. The team of CopBlockers broke off to handout more flyers, hold signs and film the police.

Even though the police had threatened to arrest peaceful people using, sharing, or possessing cannabis they had changed their tune (at least publicly) when the event was underway. One officer said that “public safety” was the main concern of the day and that the police were there to keep “everyone safe.” When further questioned about how that goal would be achieved the officer merely stated, “by enforcing the laws and keeping both sides of the protestors apart.” Yet, what police failed to mention was how they went door to door in the neighborhood pedaling prohibition propaganda and rallied the (regular) church goers that were present yesterday into attending. So, the very points the officer attempted to make to justify the police (state) presence were created by the police themselves to begin with. Only in a police state run by a backwards sense of governance can this crap make sense to anyone. For example, the police went around scaring neighbors of the Church into putting up little stakes and ‘caution’ tape on the perimeter of their properties. Yet, I caught two cops who ignored that tape and boundaries by sitting in the shade underneath a tree. I asked them if “Badges granted them extra rights and if they’d consider moving?” Of course they said, “No,” but not 20 seconds later a police sergeant came over to instruct the officers to move and remain off of private property (I think he may have even said not to talk to me). I have this on video, along with other great clips, but I took this moment to tell these police officers, “I was just trying to protect you. Like you guys to do me.”

There were a few more interactions with police and counter protestors, but at the end of the day there were no arrest or scuffles. Two people did report, as eyewitnesses, that 1 – 3 people may have smoked cannabis in the First Church of Cannabis during the sermon. Yet, I could not confirm that myself and no media outlets have at this time (not that I expect them too). I was also able to pick out the two undercover cops before they came into the church, but shortly before the service, and out them in front of the peaceful churchgoers. This most certainly made them feel uncomfortable and they both played with their phones, while avoiding making eye contact, as I questioned them about their actions as police officers. There was a band warming up behind me when this happened. So, I can only hope that the video will turn out.

The First Church of Cannabis plans to take it’s religious freedom battle to court sometime in the future. Though they plan to have weekly events, like the one today, each week, I think it still might be a long time – knowing the speed of the courts – before these folks are smoking cannabis on their own property without police threats. Stay tuned to CopBlock.org for the video from the day’s events, as well as, updates on weekly gatherings, court progress and police actions as this story continues to unfold.

In the comments below, let us know if you think the police should even bother with this event? Does it really matter? Is it the best use of their time? Is cannabis going to be legal in our lifetimes?