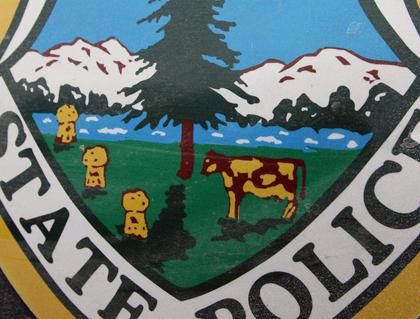 Prison inmates who make decals for the Vermont State Police slipped a pig into the official seal, and up to 30 patrol cars wound up sporting the subliminal epithet, the Burlington Free Press tells us.

The police emblem features a cow, an evergreen tree and snowy mountains (along with three unidentifiable creatures). Back in 2008, an inmate artist at the Northwest State Correctional Facility went into the computer file and modified one of the cow’s spots to resemble a pig, the common derogatory term for police, Vermont Corrections Commissioner Andy Pallito told the Free Press, like USA TODAY a Gannett paper. In 2009, the state police ordered 16-inch door decals.

Pallito said he believes 60 altered decals were made. Some new cruisers have two, while older cars may have just one if a door was replaced. New decals, costing $780, are expected Monday.

State officials learned of the prank Thursday. They blamed quality control at the Vermont Correctional Industries Print Shop in St. Alban. Prison authorities are trying to identify the inmate behind the Rorschach test.

Compare the car decal with the state police shoulder patch, which “is a modification of the Seal of Vermont and the State’s Coat of Arms originally designed by Ira Allen of the Green Mountain Boys’ fame. The mountain peaks are Camel’s Hump and Mount Mansfield as viewed from a point opposite Burlington,” according to the VSP’s site. Wikipedia has a better image from 2009.