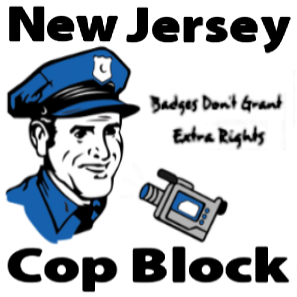 New Jersey Police are now on notice as the first Cop Block Chapter for NJ has been formed by Topher Freeman.  We have brought you many stories out of New Jersey covering the questionable practices of law enforcement for quite some time.  We can now bring you first hand accounts of the actions of these officers.

With all the issues surrounding the Police State of New Jersey and the lack of a pre-existing New Jersey Cop Block group. I have decided to start a CopBlockNJ group. We are hoping that by promoting this group’s existence, we can begin to grow.

New Jersey is the fifth smallest state, including Hawaii. However, it is the eleventh most populous state, with nearly nine million people, as well as the most densely populated state, with nearly 1200 people per square mile. It’s safe to say we have both a lot of people AND a TON of cops. New Jersey has some of the highest salaries for police as well as many, many police unions. New Jersey also has some of the most oppressive gun laws. The fact that there was no existing Cop Block group in New Jersey has motivated me to spearhead this project.

Some pluses to New Jersey are that we do not have “two-way” wire-tapping laws. In that only one party needs to be aware of audio/video recording, both in person and over the phone. While we are a rather fiscally conservative state, we are also a rather socially liberal state. Some of these facts help us as a community, but some of them hurt us; specifically firearms and Cannabis.

With that being said, if you are one of the 8.8 Million residents in NJ, please take some time to join us.

Please join me in welcoming NJ Cop Block into the family by contacting them through their links below.
Gmail CopBlockerNJ@gmail.com
Twitter https://twitter.com/CopBlockNJ
Facebook https://www.facebook.com/copblockersnj
Google+ https://plus.google.com/u/1/111127742786476908751/
Youtube https://www.youtube.com/channel/UCJs9p-9IoGF1xFmyP67xw1w
(Youtube and Google+ are subject to change when we have more followers)