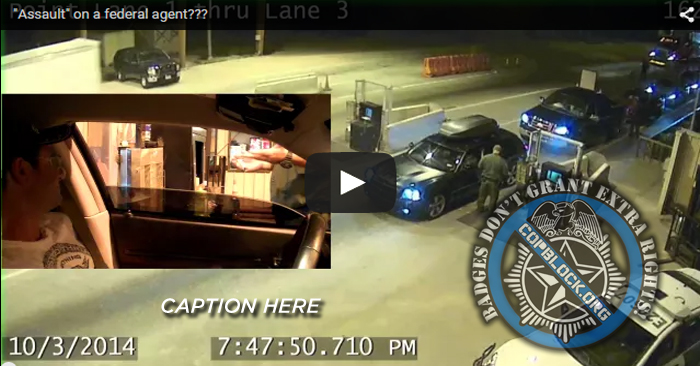 Last spring, Florida resident Michael Sophin was traveling through the Texas stretch of a country wide road trip, when he crossed through a border patrol checkpoint on the I-10 just about 20 miles from the Texas/Mexico border. His dash cam, as well as surveillance cameras captured the interaction between Sophin, and border patrol agents.

After making a joke about Obama letting everyone cross the border, so citizenship shouldn’t matter. Mr. Sophin refused to answer questions. After the Michael said good night, he drove through the checkpoint. The officer can be heard saying “You are not free to go” as Michael drives off. Surveillance camera footage shows border patrol agents getting into a car to begin pursuit.

According to the report, the officers chased a man who had committed no crime, nor endangered anyone at the entirely reasonable and safe speed of 130 mph. The officer from the checkpoint confused the model of the car, and continued to drive past Michael, even though he pulled over when he saw them approaching. The mistake was corrected and Mr. Sophin was apprehended at gunpoint without incident.

Michael is an avid firearms enthusiast, as well as lover of liberty. His vehicle was searched without a warrant, or probable cause. In his car was found multiple unloaded firearms, the ammo to match, tactical gear, and what the border patrol labeled anti-government propaganda. The propaganda, was a copy of Adam Kokesh’s book “FREEDOM!,” and the most recent issue of The New American.

“FREEDOM! is only anti-government propaganda if government is anti-freedom, which it is. This is why my book is also banned in US prisons. By banning my book, government has again revealed itself to be intellectually and morally bankrupt, nothing more than an elaborate scheme to steal for the super-rich. Freedom is a good idea, and good ideas don’t require force. Government, on the other hand, uses force to prevent the free flow of ideas because good ideas are a threat to all who profit from bad ideas. Fortunately, the more that agents of government declare themselves so clearly anti-freedom, the more people will hear the message.”

Sophin was held for eight days, originally charged with “High speed flight from an immigration checkpoint” A felony that carries a maximum sentence of five years. The charges were dropped due to the state not being able to meet its burden of proof. Just as he was about to be released, he was charged with “assault on a federal agent” the federal equivalent to “contempt of cop”. Michael spent ten more days in jail before his release on bond.

The ATF sent him a letter as a courtesy to inform him that they stole his firearms through asset forfeiture. Asset forfeiture is a way that the state takes possession of items that are used in the commission of a crime. Millions of dollars worth of  drug money, vehicles, firearms, jewelry and many other valuables are stolen from people through the asset forfeiture program every year. Asset forfeiture was originally design to cripple large criminal enterprises. The FBI uses asset forfeiture, in conjunction with the RICO act in order to stop large criminal organizations from returning to power through their ill gotten gains. Asset forfeiture is nothing new, and goes all the way back to the time of kings, but even then it was designed to forfeit objects that resulted in someones death, or were used carelessly. Instead however, we have the people claiming to protect us, from the people on one side of the invisible line, victimizing, one of the very people they are claiming to protect.

Michael Sophin was sentenced to eight months in Federal prison with time served. He is currently out on bond awaiting an appeal. One of the jury members went on the record when asked about why he voted guilty. His response; “He should have to answer questions like the rest of us.”