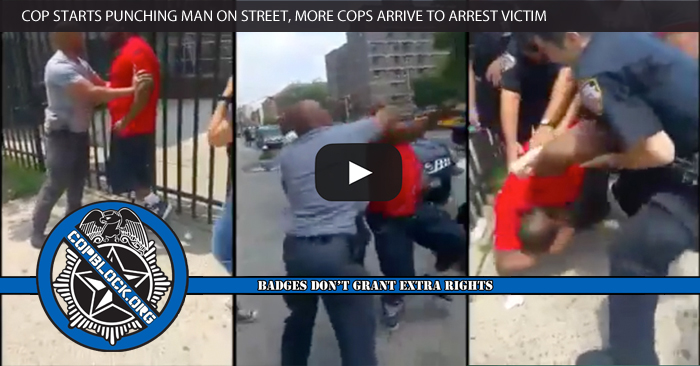 As the video (embedded below) starts out, the individual recording the incident had just turned on his camera after seeing two armed, plain-clothed officers putting their hands on his friend. As the officers corner him, he can be seen giving his ID to one of the officers, while saying over and over that he hasn’t done anything wrong. According to the man who recorded the confrontation, the two officers demanded his friend’s ID without giving a reason for doing so. The officer then puts the man’s ID into his pocket, appearing to have no intention of giving it back. At this point, the man puts his hands in the air as if to show that he is no harm to anyone. “I’m letting you do your job! I’m not touching you, I’m not stopping you or anything!”

“Turn around.” the officer demands. The officer then puts his hands on the man in an antagonizing manner. The victim keeps asking why the officers are targeting him as he gets further cornered and then that’s when the officer starts swinging. It was obvious from the beginning that the cop was just looking for a fight. Soon after the officer and the man exchange swings, more New York police officers show up to the scene and pile on top of the man who was assaulted by the officer and arrest him, as if he was the one that started the violent confrontation. It is not yet known why the man was originally stopped by the plain-clothes officers. More details to come as this story develops…