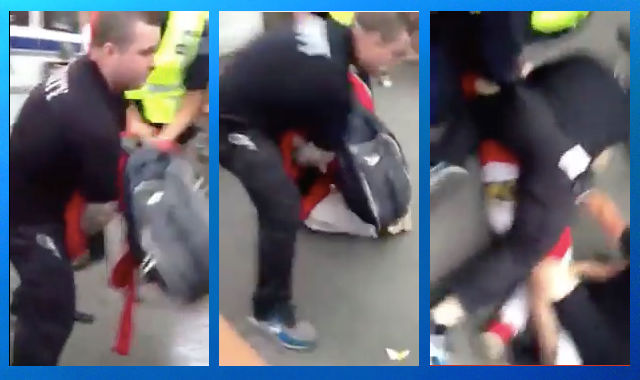 The following post was written by a reader and shared at
CopBlock.org Submissions

The minor who is being brutalized in the video below asked the police officer why he was being detained. The cops took that as a hostile act and responded and acted under the guise that he was “resisting arrest.” Immediately they proceeded to use a choke hold, which is a prohibited method of restraint, and especially disturbing when used on a minor. At that point more Royal Canadian Mounted Police officers rushed to the scene and shoved him into the vehicle by force. The situation ended with the sixteen year old man’s unjust incarceration

The victim has agreed to the release of this footage. I had no involvement in filming it, but I want people to know that this unjust “police state” is not only a problem in the United States, but has also spread north. I’m only here to share this incident with more people and do not want any un-needed attention. I trust CopBlock.org to get this noticed and hope it helps to bring awareness and justice, and an eventual end to the brutality and corruption of the police forces in America, Canada and around the world.