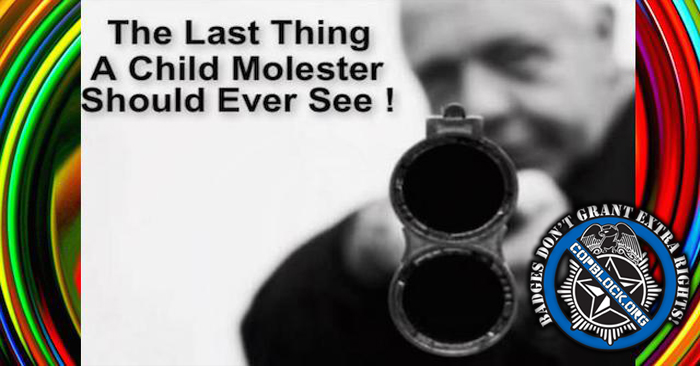 Female Child – At the center of this horrifying story is a very young girl who has been the victim of long term sexual abuse from her own father and perhaps others as well.

Mother – The mother of this child has been denied her rights, been the subject of unlawful targeting and been slandered by the entire local system, as part of the cover up of the sexual abuse of her daughter.

Grandmother – The mother of the child’s father has not only supported her shitbag son, not only used her connections and influence to cover up the atrocities, but has also contributed to the sexual abuse of her own grand-daughter.

Police – Have been unwilling to become involved in this situation in any way that negatively impacts the father or grandmother, thus proving there is not a single ‘good cop’ on the entire force.

Courts – With some connections to the grandmother, the local court system has not only ignored the sexual abuse of a child, but has helped the father and grandmother maintain custody long after it was apparent they had no business in the child’s life.

DHS – Through connections with the grandmother, the DHS has helped to cover up the sexual abuse, assist the abusers in maintaining custody and influencing the other local agencies. Their complicity in this case runs very deep and is extremely alarming.

[Click here to read the full story at the Salem Insider]

The list of crimes against the child are long and incredibly disturbing. They include being forced into child pornography, sexual abuse, forced to watch the rape of a minor on film, having a gun stuck in her mouth, being forced by the grandmother to sleep with a known sex offender and even subjected to having to wear a ‘tramp stamp’.

On August 12 2013, records show the case took a sinister turn. The daughter arrived for her visit, carrying an expensive child’s electronic game called a ‘Leap Pad 2′. The child was showing her playmate some videos on the device. When her playmate left, the mom asked to look at the device, and the daughter didn’t want her to see the pictures. The Leap Pad contained 8-9 pictures of a child in the nude, spreading her labia with one, or both hands, laying on her belly, including up-close photos of her genitals. One was clearly the victim; she was clearly in her own bedroom in her fathers house wearing sunglasses, and spreading her labia with both hands. In one image, what were obviously large, adult hands, were spreading her labia. DHS would later state that the daughter used a timer to take the photos herself, (at the age of 7) and that the two hands on her privates were her own.

The FBI has been contacted regarding these matters but has excused themselves from it by stating that they were not ‘invited’ by local police so they would not come. It seems incredibly likely, at this point, that without outside intervention, the abuse will be allowed to continue and go unpunished.

We urge you to take a few minutes out of your day to CONTACT THE PORTLAND FBI and demand that they investigate the absolutely horrifying sexual abuse of this child.