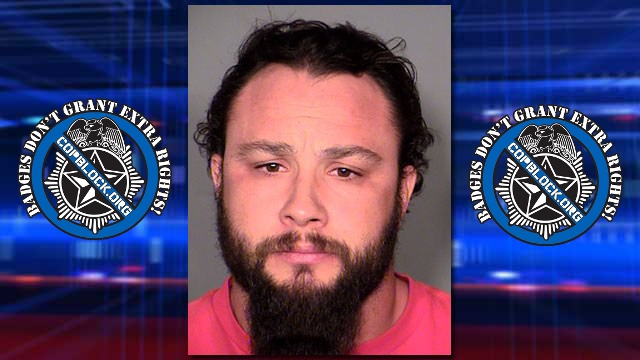 On Thursday (July 2nd), Michael Kitchen, a former detective with the Las Vegas Metropolitan Police Department, was sentenced to just three years of probation for assault and attempted robbery against an escort.

A Las Vegas police detective accused in an attack on a prostitute was sentenced Thursday to three years probation.

Michael Kitchen pleaded guilty last month to attempt theft, a gross misdemeanor. That charge would be reduced to misdemeanor battery, should he complete probation.

While on probation, Kitchen must be employed full-time, complete 10 hours of community service per month, refrain from drugs or alcohol and not possess any weapons. Kitchen, who was on duty and driving an LVMPD vehicle at the time, had met his victim via an online ad and arranged to meet at her house. The pretense for his visit and his original explanation to Metro “investigators” was that he was attempting to get a massage. Even though he made just under $174,000 in 2013, he claimed that getting a massage at a legitimate business would be too expensive.

Ultimately, the dispute between them stemmed from the price that would be paid for her “services.” Det. Kitchen initially paid her $100, but she later told him that that was just for her “time and company” and that it would be another $150 for sex. She testified that he then became “angry and ultimately violent” and attacked her in an effort to get the $100 he had already paid back. The resulting injuries included a concussion and a fractured wrist.

Kitchen is just one among a string of LVMPD officers recently charged with some sort of sex related crime. Metro itself, of course, has a long history of scandals and a very scant history of holding anyone on their payroll accountable for their actions. So, as ridiculous as the light sentence Kitchen received is, it’s not exactly surprising to anyone in the Las Vegas area.