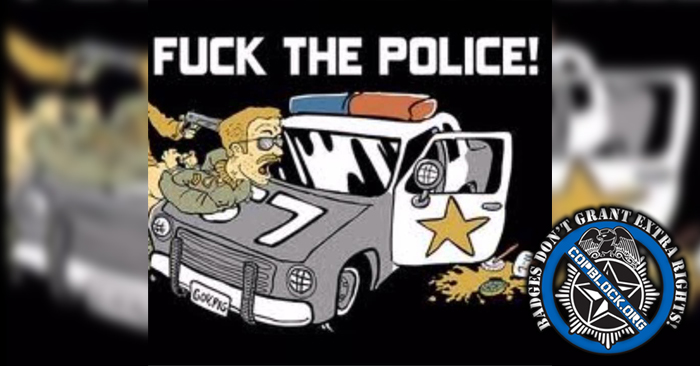 *This post about cursing at cops was originally post at “The Marshall Project” by Ken Armstrong on June 26, 2015*

Yesterday the Washington State Supreme Court threw out an obstruction conviction against a juvenile who had insulted police and refused to go away when they were detaining his younger sister. The juvenile, with the initials E.J.J., directed the word “motherfucker” at Seattle police officers, according to pleadings in the case. He used other names, too.

E.J.J., concerned for his sister’s safety, had also insisted on staying and watching, refusing a police command to go inside the family’s house and shut and lock the wooden front door behind him while officers dealt with his intoxicated sister in the driveway.

For the conviction of obstructing police, E.J.J. was sentenced to four days of detention (served on a work crew), two months of community supervision, and 18 hours of community service.

His appellate attorney, Lila Silverstein, told The Marshall Project: “We all know that speech does not have to be pretty to be protected.” And the state Supreme Court agreed. Ruling that E.J.J.’s conviction violated the First Amendment, the court wrote: “While E.J.J.’s words may have been disrespectful, discourteous, and annoying, they are nonetheless constitutionally protected.” eaffirmed a principle with a long and geographically sweeping history in the United States, to wit: People are allowed to call the police names, even really bad names, and really, it’s hard to imagine a name much worse than “motherfucker.” (Editor’s note: Just because you can, doesn’t mean you should.)

There are exceptions to this, of course. But in general – as the examples below attest – as long as people don’t resort to conduct that threatens violence, or use “fighting words” likely to incite a violent response, they can go ahead and tell police what they think of them, be it through profanity, gesture, or donut reference.

“I will have a nice day, asshole.”

Summary: Two Omaha police officers, acting on an admittedly vague tip that a black person would be bringing in cocaine on a flight from Denver, stopped Lu Ann Buffkins, the sole black passenger to depart a particular plane. Buffkins had arrived holding a teddy bear, arousing suspicion because, to the eyes of police, the stuffed animal’s seams appeared to be resewn, suggesting it might be bearing cocaine. After one officer “kneaded and felt the teddy bear” without detecting any cocaine, the police told Buffkins she was free to go. “Have a nice day,” they told Buffkins, to which Buffkins replied, “I will have a nice day, asshole.” The police arrested Buffkins for disorderly conduct.

Finding: The court held that the word “asshole,” uttered under the circumstances here, did not amount to a “fighting word” that would justify arrest.

Addendum: “Asshole” has also been upheld in Indiana, where, in Cavazos v. State (Court of Appeals of Indiana, 1983), a woman whose brother was being arrested in a tavern called the arresting officer an “asshole,” and in New York, where, in New York v. Gingello (City Court of New York, Rochester, Criminal Branch, Monroe County, 1971), a passenger in a car pulled over for a defective headlight told the officer, “You are an asshole.” The New York court, in a finding some New Yorkers might dispute, wrote that “as a matter of law, the epithet ‘asshole’ is not so inherently inflammatory that, when addressed to an ordinary citizen, it is ‘inherently likely to provoke violent action.’” The court added: “There was a period of time in our cultural milieu when the epithet may well have been inherently inflammatory. However, that situation no longer exists.”

“You know, you’re really being [an] asshole.”

Summary: Anthony Greene, described by a federal appeals court as a “six-foot, 300-pound lawyer,” went to the Grand Rapids police department to get his car, which had been towed. When a lieutenant answered Greene’s questions about storage fees in a way Greene considered to be arrogant, Greene told the lieutenant, “You know, you’re really being [an] asshole.” When the lieutenant said, “You can’t talk to me like that in my building,” Greene replied, “Well, if that’s how you feel, you’re really stupid.” Then came pepper spray and handcuffs.

Finding: “Did Mr. Greene have a constitutionally protected right to call Lt. Barber an ‘asshole’ and castigate him as ‘stupid?’” the federal appeals court wrote. “The answer, we suggest, depends on the time, place, and manner in which Mr. Greene so expressed himself.” Under the circumstances here, the court determined, while “Mr. Greene’s remarks were unflattering to Lt. Barber,” they “clearly gave Barber no license to abridge Greene’s freedom to speak as he did.”

“You big muttonhead, do you think you are a czar around here?”

Summary: This one is sort of confusing. Frank Ruthenbeck, who worked as a prosecutor, became the prosecuted after entering police headquarters and saying to a police officer (who, at the time, was acting as a clerk of the court, receiving fines in an office outside a courtroom): “You big muttonhead, do you think you are a czar around here?” Ruthenbeck was charged with and convicted of disorderly conduct.

Finding: The New Jersey Supreme Court threw out Ruthenbeck’s conviction, writing: “A muttonhead as defined by the dictionaries is a dull, heavy and uninteresting person. That the dignity of the clerk may have been ruffled by the language addressed to him is possible, but … [i]t is not every trivial epithet addressed by one person to another, even in the office of the clerk of the recorder’s court and to a police officer doing desk duty there, that constitutes disorderly conduct.”

“… should be at a fucking donut shop.”
MAN WITH FUCK THE POLICE SIGN:

Summary: When, at 2 a.m., two Lynchburg police officers approached Mr. Marttila to ask about a “vehicle registration problem,” Marttila, denying that the car in question belonged to him, walked away from the car and sat down on a nearby house’s front porch steps. When the police, upon learning that the unregistered car did in fact belong to Marttila, handcuffed Marttila and ushered him off the porch, Marttila “called [the officers] fucking pigs, [and said they] were fucking jokes . . . [and] should be at a fucking donut shop.” For this he was charged with and convicted of breaching the peace.

Finding: The state Court of Appeals threw out Marttila’s conviction, finding that his “words did not have the necessary ‘direct tendency’ to cause ‘an immediate, forceful and violent reaction by a reasonable person’ in the position of the police officers at whom the words were directed. Although [Marttila] stiffened up when the officers began to handcuff him, he made no threatening gestures and merely expressed contempt for the officers in a general sense …”

“Why don’t you pick on somebody your own size?”

“Why don’t you pick on somebody your own size?”

Summary: When Raymond Wayne Hill saw two Houston police officers approach a friend who was stopping traffic on a busy street, apparently to enable a vehicle to enter, Hill yelled at the officers: “Why don’t you pick on somebody your own size?” Hill’s friend was not arrested – but Hill was, under a Houston ordinance that made it unlawful to “oppose, molest, abuse or interrupt any policeman in the execution of his duty.”

Finding: The U.S. Supreme Court ruled that the Houston ordinance was so overbroad as to be unconstitutional, writing: “The freedom of individuals verbally to oppose or challenge police action without thereby risking arrest is one of the principal characteristics by which we distinguish a free nation from a police state.”

Summary: A school bus, taking high school students home, stopped at an intersection. A police cruiser stopped behind the bus. A Connecticut court describes what happened next: “The defendant (a student in the back of the bus) wiped the condensation off the rear window of the bus and, upon seeing the trooper, waved a school chum over to him and then proceeded to make a gesture toward the trooper in which the middle finger of the defendant’s right hand was held in an upright position with the palm of the hand toward the defendant.” The trooper hit his siren, boarded the bus, and arrested the student, who was charged with and convicted of making an obscene gesture.

Addendum: The middle finger – referred to by one legal commentator asDigitus Impudicus – has also been held up, and subsequently upheld, in other states, including Kansas, where, in 1997, a federal court determined in a civil suit that no crime was committed when a Mr. Duane Cook (not to be confused with Dane Cook) drove by a highway patrol officer – parked in his patrol car, monitoring the speed of passing vehicles – and “flipped the bird” to the trooper. “As irritating or insulting as [Cook’s] conduct may have been,” the court wrote, “government officials may not exercise their authority for personal motives, particularly in response to real or perceived slights to their dignity.”

CopBlock.org Contributor Adam is Pepper Sprayed for Flipping off a Cop:

Video of Adam in Police Custody: