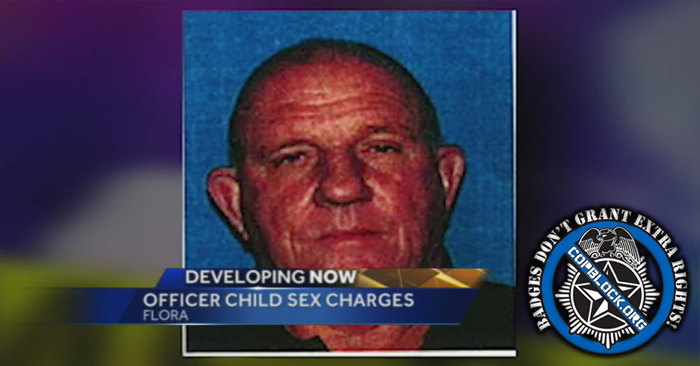 James Alderman, 58, was a Flora, Mississippi police officer until this Wednesday, when he was arrested and charged with two counts of gratification of lust. The accusations stem from young children whom Alderman had access to due to his wife’s daycare business – which was ran out of their home according to News 16 in Jackson, MS:

A judge set an $800,000 bond Thursday for the former Flora police officer charged in a child molestation case.

Alderman was fired Wednesday by the Flora Board of Aldermen, authorities said. He had worked for the department for more than 25 years.

“It’s heartbreaking for all of us — certainly for the victim or potential victims,” Flora Police Chief Dwayne Moak said. “This kind of conduct is not condoned in any manner by anyone. It needs to be prosecuted to the (fullest extent of the) law.”

Most of the details in this case have yet to be released and they probably never will be, due to the nature of the crime. It’s still good that Alderman is going to face his victims and bear responsibility for his actions. Yet, when you watch the video of Dwayne Moak – the Chief – you can tell he catches himself when he says, “It’s heartbreaking for all of us…. certainly for the victims..” I believe he wanted to say how hard it was for his officers to arrest one of their own. I can understand feeling emotions when you have to arrest someone you’ve worked with for 25 years, yet, it shouldn’t have been ‘heartbreaking’ to do so. This man was doing some sort of sexual behavior with, or around, children. That’s disgusting and inexcusable.

There’s some serious ‘cop logic’ expressed here and it’s troubling – as all cop logic is. Here you have police who find it heartbreaking, presumably, to arrest one of their own, but when they arrest someone for merely putting something in their bodies, like marijuana, then the police are just doing their job. The police should find kicking in people’s doors and arresting them for possession of certain substances heartbreaking, especially since most of these arrests ruin the lives of those arrested, and the times where they arrest people whom have actually harmed another as the, “just doing their job” part.

Luckily for the people of Flora the city council didn’t feel as heart broken as the chief did and promptly fired the officer, who now lives behind bars. Hopefully, no more victims come forward, but often times they do. For now, bravo to the police department and city for taking one of their own off the streets. When the crime involves children not even the thin blue line can protect you and rightfully so. I can only hope that we can see more of the bad officers arrested, fired and brought to face their victims in a timely manner, as was the case here (at least with the details we have at this time).