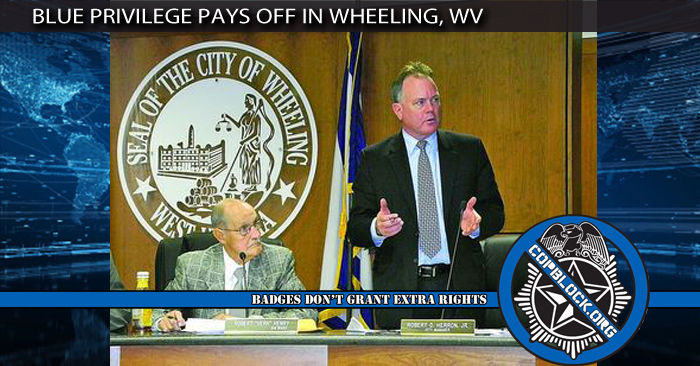 Wheeling, WV City Manager Robert Herron recently approved a $2,000 annual raise for all police officers minus the chief of police while only giving firemen a $400 annual raise.  Herron’s excuse for the high raise given to the police officers was to ensure retention of current officers and to entice new recruits with a competitive salary.  The city’s charter gives the city manager the authority to make this move without any input from council members.

Herron says that the police department has seen 19 officers leave the job since  2012 and recruitment efforts have not fared well to keep the force staffed.  In April of 2015, only 36 people took the police civil service exam.  This is half of the number that took it in 2010.  Of those 36 that took the exam, only 11 could pass both the written exam and the agility test to even be considered for hire.  In 2010, 31 were able to pass both tests.

Manager Herron based his decision on a report by a local firm that outlined recent departures and salary comparisons with other regional departments, as well as individual conversations with council members.  Several council members have backed the decision of the city manager while several others have voiced disapproval and concern over the unbalanced wage increases.

Councilwoman Gloria Delgrugge said, “By doing this, you’re causing a lot of animosity.  You’re going to cause a rift between the fire department and police department.  I just don’t agree with how we’re doing this, because to me it’s saying that everyone else doesn’t matter.  We need to be fair here.”  She also went on to voice her unhappiness at council’s lack of authority in the matter.  “What good are we?  We don’t have a say in this, ” she said. Retired police officer and council member Robert Henry also voiced his displeasure in saying this sends the wrong message to the city’s workers.  “I think that you don’t pick and choose who you’re going to give a raise to.  You give them all the same amount. …When I was on the police department, we got the same raise the rest of the city got, and that seemed fair,” Henry said.

With the new raise, police in Wheeling will make just over $37,100 annually while an entry-level fireman earns $23,400.  These fireman are also required to foot the bill at a cost of $400 annually for emergency medical service certification.

Wheeling police department is wrought with problem officers that have been charged with such crimes as sexual assault and domestic violence involving a firearm.  In December of 2011, Wheeling Officer Matthew Kotson was arrested by WV State Police for a warrant for sexual assault.  At the time of his arrest, he was seen peering into the window of a local school where one of the witnesses to the case was employed.  (Wheeling Intelligencer News Story)

A  year before this incident, Kotson illegally detained a man who was legally carrying a firearm.  His actions cost taxpayers $55,000 to settle the 2nd Amendment suit brought against the city of Wheeling. (West Virginia Record Story)  Kotson remained employed as an officer after this case until ultimately being fired due to the sexual assault case.

In a more recent case, Cpl. Will Ward was arrested in March of 2015 on a domestic battery charge and brandishing a firearm. Immediately after his arrest, Ward was arraigned and bailed out on a $3,000 bond.  He is accused of pointing a gun at his girlfriend in the presence of her children.  He appeared briefly on Monday, June 29 for a pretrial hearing.  He is currently on paid administrative leave pending the outcome of an internal affairs investigation. I am following this current story closely and will be doing a story in the future as well as updates, as they take place.

These are only two examples of the misdeeds of the officers employed by the Wheeling Police Department.  One only needs to do a Google search to see how many times the actions of their officers have been brought to light. The Wheeling Fire Department is tasked with the dangerous job of fighting the many fires that take place each year in this aging city which is populated with thousands of Victorian homes that have stood for over a century. The department is also the sole source of emergency advanced life support in the city to stabilize patients while en route to any of the three major hospitals in Wheeling.

There is no arguing that both jobs present a level of danger, but it is of my opinion that these firemen got the short end of the stick in this recent decision by the city manager.  The job of a fireman involves a much high level of danger.  These firemen also are required to undergo much more thorough training than their law enforcement counterparts.

For the respective salaries offered, I sure as hell wouldn’t want either job.  With that being said, I do not believe that the recruitment numbers for the Wheeling Police Department are down because of salary.  With the growing number of high profile cases involving the misconduct of officers and the public perception of the police, my money would be on the fact that more people are opening their eyes to these actions and want no part of it.

Comment on the story and tell us what you think.