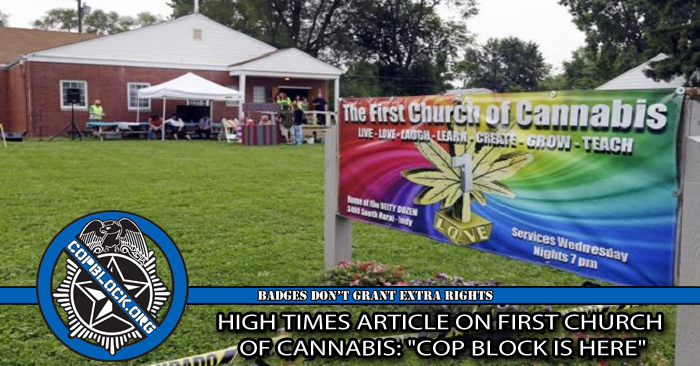 On Wednesday (July 1st), everybody in Indianapolis was primed for a big showdown. The First Church of Cannabis had stated that they were preparing to take advantage of Indiana’s Religious Freedom Restoration Act, which supposedly protects people engaging in activities during religious practice.

However, although Indiana accepted the First Church of Cannabis as a recognized church, Indianapolis Police Chief Rick Hite saw things differently. In the lead up to the inaugural services on Wednesday, he pledged not just to arrest peaceful people openly smoking marijuana during the service, but also to employ dubious charges of “visiting a common nuisance” in order to justify searching people and their vehicles.

A funny thing happened on the way to the Big Dance, though. Although there was still a huge, wasteful police presence, a counter-protest, organized and egged on largely by the police; and a fancy new spy camera installed by police hours before, there were no arrests or Orwellian searches. In fact, the police weren’t even willing to admit to HighTimes.com that they were there as a result of the possibility of marijuana use:

…the overall attitude of the Indianapolis police felt considerably different than the previous wild eyed, drug war rantings of their boss. The department refused to admit that their presence in front of the church had anything to do with marijuana. Lieutenant Richard Riddle, a spokesperson for the IMPD, told reporters that officers were simply there as a public safety precaution and to control traffic like they would any other event in Indianapolis. In fact, according to that article the only problems came from those riled up neighbors, and even those were pretty minimal. So, what was so different between Wednesday and the previous Friday, when the Chief Hite made all those threats about arresting people and finding loopholes in the Fourth Amendment.

Obviously, a big factor was church founder Bill Levin’s announcement that the service would not include the open use of marijuana, after all. You just can’t poke a heavily armed and easily angered bear without expecting it to react. (There can, of course, be debates about whether that potential reaction is worth risking for a given issue, but that’s a debate people have to have with them self.)

However, in the same High Times article another reason is pointed out for why things went from 60 to 15 so quickly.

Cop Block Was There As chronicled by previous posts on CopBlock.org, Ademo and several others within the Cop Block Network made the trip down to Indianapolis in order to participate in and document any police abuses during the inaugural service at the First Church of Cannabis. They came ready to film the police and to make sure everyone there knew their rights, as well as handing out CopBlock’s informational materials. They also brought the attention of Cop Block’s national audience.

Once again according to HighTimes.com, all of those things were as instrumental, if not even more so, in keeping the Indianapolis Police on their best of behaviour that day:

Perhaps this change of draconian heart was out of respect for Levin’s recent decision to ban all illegal substances from the church grounds. Then again, as Ohio attorney Brice Keller pointed out, this shift in strategy likely had more to do with the fact that the whole nation was watching for something dramatic to unfold.

“Cop Block is here,” said Keller. “Cop Block and the news, and everybody having all these video recording devices everywhere probably has caused the police captain or somebody to say, be on your toes today and make sure what we’re doing is protecting the peace.

“If police were going to arrest somebody for a minor offense,” he continued, “there would be a swarm of people out there with their video recorders, and it wouldn’t be good for anybody.” (Emphasis added.)

On the issue of probable cause, Keller said police would need to establish it for each individual, and that simply being on the premises of the cannabis church did not give authorities the right to initiate random searches. What the Indianapolis Police Chief initially said was the force was going to cite parishioners for visiting a common nuisance, which Keller said could have been used as a gateway to search the pockets of parishioners and, perhaps, even their vehicles.

But in the end, there was no shakedown… Not a single incident in which the IMPD felt the need to investigate or attempt to establish probable cause of any kind.

So the moral to the story is protect your neighborhood from the real troublemakers  by joining an existing Cop Block group in your area, starting one if there isn’t already a Cop Block affiliate nearby, and become a part of the growing CopBlock Network. And always Film The Police. It could save a life and that life could be yours.