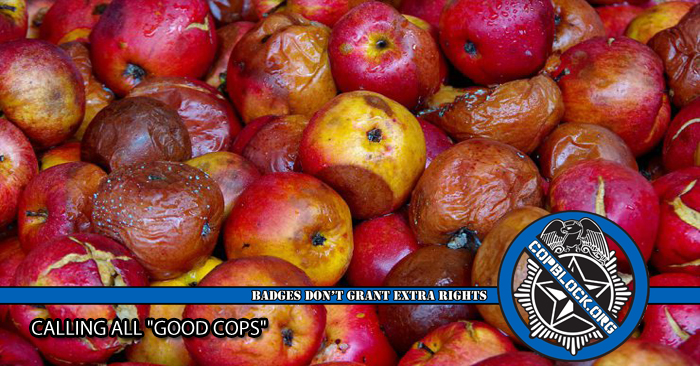 The myth of the “Good Cop“ has been ongoing for some time now. I wanted to give an open invitation for those law enforcement officers that believe they are “Good Cops” to come forward and reveal themselves.

While people’s definitions and parameters may be different, a very small sampling of my own should suffice to get some response.

1. Your income cannot come from theft or coerced compulsory taxation.

Theft is an act that as a law enforcer you must punish and incarcerate people for, so it stands that you yourself should not be beneficiary to income of the same origination. Payment for services by compulsion and punishment for refusal is little more than what “the law” defines as extortion and groups that use these methods are considered criminal in nature and are arrested and punished as well. Acting as the sanctioned and protected mafia of an area doesn’t turn an immoral and illegal by law act into a moral and righteous act.

2. Your income cannot come from dealing in stolen goods.

Police departments and sheriff’s offices often use the sale of seized property as a means of income. This activity is again illegal for anyone not on “Team Blue”, so it should be that you yourself do not make income from the act. Selling these stolen goods at auction nets PD’s and SO’s loads of money for their newest toys, from Lenco BearCat APC‘s to boats,  motorcycles and weapons of all sizes, all in order to further the “just following orders” excuse.

3. You do not enforce laws that have no victim.

Victim-less crimes account for more incarcerated people than any other. Crimes without victims are willful and wanted acts against the only participant and should not be used as a reason to punish people. Enforcement of laws that lock up or financially hurt people who seek to only endanger themselves, intentional or not, is a piss poor way to deal with vices and voluntary actions. As the late Lysander Spooner laid out,”There can be no crime where there is no victim.” A counter argument goes that society is the victim. But, as society is, as a whole, a collection of unaffected and in most cases unknowing of the “crime” being committed, “society” cannot be held as a victim when individual reactions cannot and will not be taken into account and individual restitution is not required.

In the minds of many, myself included, there is no such thing as a “Good Cop”. There are good people who are police officers who have in their minds a mental deception that they are doing a noble and decent job at being agents of the State apparatus. There are people with the greatest intentions of doing solidly decent work and serving the community they live in, protecting life and property; but their role in the system and it’s malfunctions; it’s blatant hypocrisy to that which it claims to achieve negates those pure intentions. You cannot be a good part of a bad system.