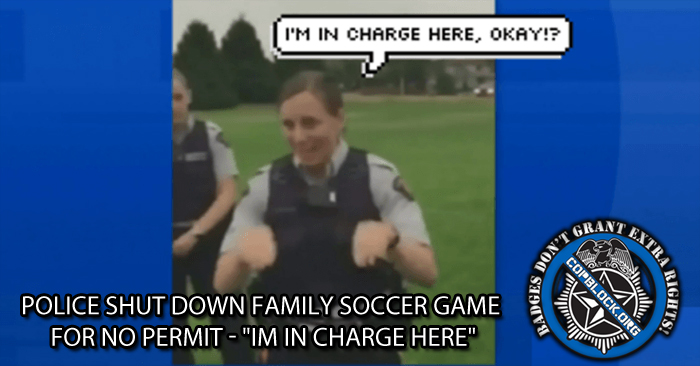 A British Columbia, Canada family were harassed last Sunday by Surrey police while attempting to have a weekend game of soccer in a public park.

Footage recorded from the scene shows Royal Canadian Mounted Police officers telling Satnam Singh Pawer and his family that they need a permit to play on public property despite other families in the vicinity doing the same thing.

“Listen to me, I’m in charge here today, okay,” one officer goads after clapping her hands as if she were talking down to children. “So today, you will pick up your cones [and] you will go home.”

Owen Croy, Surrey’s manager of parks and recreation, said that “official and organized” games need permits, and not informal and impromptu family gatherings like this one.

“The City of Surrey welcomes families and their kids to recreate and play games in our parks,” Croy said. “That’s what they’re there for. Perhaps a bit more discretion could have been used.”

At a time when the city is seeing record crime rates and children are out of school for summer vacation, the family wonders why police chose to target them.

“Why [can’t we] play? We were playing with kids.” one family member said. “I can see clearly that [police] just wanted to kick us out from here. And [I even asked] them, [do] you have nothing better to do in Surrey?”

The RCMP has blamed the inexperience of law officers for the incident, while the scenario left confused children wanting real answers as to how this could have happened.

“Some cops came and said we cant play and stuff,” one child who participated in the soccer game said.

“Do you feel bullied?” local reporters asked the child.

“They still think they were doing something wrong on the ground[s], something illegal,” one family member said.

Another family member said the children are now afraid of police officers.

The city of Surrey has now told citizens that they can indeed play soccer in the public parks.