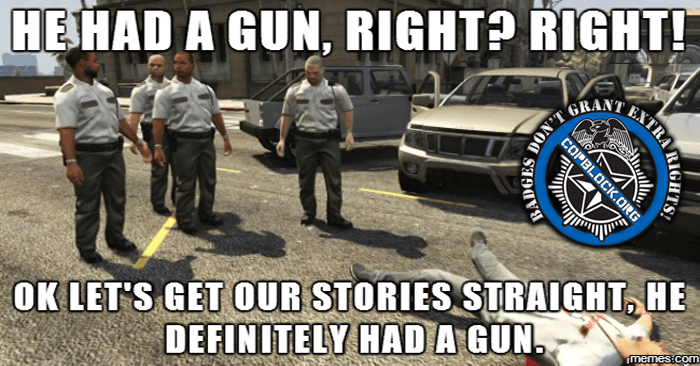 Daily I wander through the dystopic dadaist news while looking for cases of police abuse and corruption. Any time a headline comes up in which a person has been killed by police, I take a look. For obvious reasons, these are the most telling tales of our police state, and the ones our contributors and readers alike are most concerned about. Yet as soon as that article says ‘He had a gun’, I consider the story dead.

Mind you, many of times the police shooting victim never once pointed or directly threatened officers with their weapon. Its mere presence is always used as all the justification that has ever been needed to remove any complicity in a crime from officers who kill.

The problem here is that IT IS LEGAL TO OWN A GUN IN AMERICA, and whether you agree with that or not, it means that people are being shot for a reason which is itself not even against the law. The entire ‘I feared for my safety’ pretense IS NOT A LEGAL PRETENSE FOR KILLING in our country. A clear and unassailable threat must actually exist to warrant that killing, as per the basis of our self defense laws. If police can illegally kill people who are are legally carrying firearms and get away with it, on the basis that they had a firearm in their possession alone, then that the ‘law and order’ groupthink anthem by our enforcement and judicial system are nothing but a gigantic lie.

The legal status of a weapon may not be known during a shooting. It is possible that bad guys have possession of a gun illegally and are up to no good with it. However, due process is supposed to guarantee that you are given a chance to prove the legality of your actions, not get shot to death in the street by people who are more worried about themselves than the individuals and communities they serve.

Our very lives and guaranteed rights are under attack by our blind acceptance that it is okay to use a dangerous weapon to kill somebody for having a dangerous weapon. It creates a loophole by which police have carte blanche to kill citizens who are in not in violation of the law, let alone deserve nor meet the legal criteria for receiving a death penalty. And this is why I am starting to believe that a very large number of cases in which the killing by police is justified by the victims possession of a firearm are fabricated bullshit. Because those few simple words, that one claim alone, have so much power- I have no doubt that it is being abused time and time again.

First of all, it works. Even a voracious critic of police like myself is often turned back by that mere claim. While I will often be skeptical of the official story, I will have to concede that it is not a battle worth picking. For regular people, that claim acts as an automatic shut-off valve for skepticism regarding police killings. If police say the victim had a gun, the dead person may have well been begging to be shot to death, regardless of whether they actually did have a gun or intended to use it.

The result of this is that often these cases go ignored and become forgotten. The pressure for transparency and accountability never exists when the public automatically accepts the official narrative. Without support or awareness, there is no assistance for the bereaved or their family, and a potentially wrongful homicide by police is allowed to be forgotten.

This is similar to how police and media work together to smear the names of arrestees who have not had their day in court, and are publicly colored as guilty before the presumption of innocence has even been given a chance. Newspapers and police scanners don’t send out reports to the general public when an arrested person is later found innocent of the crimes claimed against them by police. Yet so long as the public buys the ‘he had a gun’ story in the first 24 hours, law enforcements presumption of innocence will often be maintained, even when it may later be demonstrated to be a complete fabrication.

Police are human beings and when they fuck up it is in their best interest to cover it up before the consequences come around. Do you really believe that cops are such superhuman individuals that they would not lie or commit other falsehoods to cover up their mistakes or outright atrocities? Both the individuals and the institution of policing have nothing to gain from full transparency. Their human instinct is self-preservation at all costs. If you think they are above this and that their evolutionary/psychological/moral shit don’t stink, you are an outright fool. The second and greatest reason that I tend to doubt the seemingly unending barrage of police facing armed bad guys is that it does not really fit with anything anyone knows or understands about human nature. From the dumbest criminal and his infantile fears, to the master evildoer with their ability to calculate odds, it is pretty unlikely that all of these people are intending to do harm to or get into a shootout with police officers.

Now, I am not saying it doesn’t happen. Psychosis, narcissism, megalomania or desperation are enough to drive someone to such a poor decision. And it certainly does happen from time to time. But the regularity with which we are being asked to believe that -people are drawing weapons of every sort against police and posing a clear threat when they are out-armed and out-numbered and would probably be captured/killed later even if they did is escape- goes far above and beyond the incidence rates in human societies for such behavior to manifest naturally.

People are generally scared of police and for their own lives. And even if the only news they catch are the occasional papers drifting down the street like tumbleweeds of bad juju; it is pretty obvious that your chances of surviving such a situation are next to nothing. It simply does not make any sense that so many people are choosing to enter into unwinnable situations with such permanent irreversible outcomes. Even the dumbest of house apes are somewhat clever about preserving their own lives. It does not make any sense whatsoever that so many put themselves in a situation in which death is the only likely result.

That we actually allow ourselves to automatically believe every headline that tells us that the police shooting victim ‘had a gun’ is indicative of the sort of mindless conditioning and automated groupthink we are apt to as a people. We will believe the unthinkable if it prevents our faith in authority from being shaken. We grasp desperately to the foundations of such falsehoods because without them we would have to confront the reality that authority cannot be taken literally. The institution of policing is itself a swarming nest of the sort of illegal and immoral behavior it has falsely made us believe is commonplace among us, so that it could commit the same crimes by claiming to protect us from them.

We are adrift in a social reality dictated by buzzwords and symbolic super-passes. We have come to identify more closely with the symbols for things than the things that they are actually supposed to symbolize. The represented has taken a backseat to the representative, and all rationale and reason becomes nearly impossible on a widespread scale. The signal has become more influential than that which is signified. If ‘killing an innocent person’ can symbolically be transmuted into ‘had a higher than average chance of hurting a law enforcement officer’ through constant propaganda, then we can forget all about the fact that killing is wrong and justify it on some mental acrobatics that are devoid of any real substance.

With all of this in mind, every time you read ‘He had a gun’ as the justification for another killing by the police state, at least be skeptical. There is a chance that the person really did needlessly put police in an unwinnable situation in which a tragic killing was unavoidable. But there is also a chance that the killing was a knee-jerk over-reaction or that it was outright malignant in intent. When you allow a few words to twist conceptual truth into justification for illegal and immoral activities, it is you who are the coward, the criminal, the parasite on humanities quest towards harmony and peace.

While you were busy bypassing the deeper truths and skimming reality for buzzwords to confirm your biases and prop up your shaky worldview and belief system, the new world oligarchy killed Harmony and Peace. The terrorists led several enforcement units on a medium speed chase, and according to initial unsubstantiated reports from the police, when Harmony got out of the car HE HAD A GUN!* So there was no choice but to kill them both on the spot. Story over. Don’t think any further and don’t ask any questions.

*It was a toy water gun that looked like a banana and was tucked into his sock, which he never threatened or intended to squirt anybody with, but hey- HE HAD A GUN!