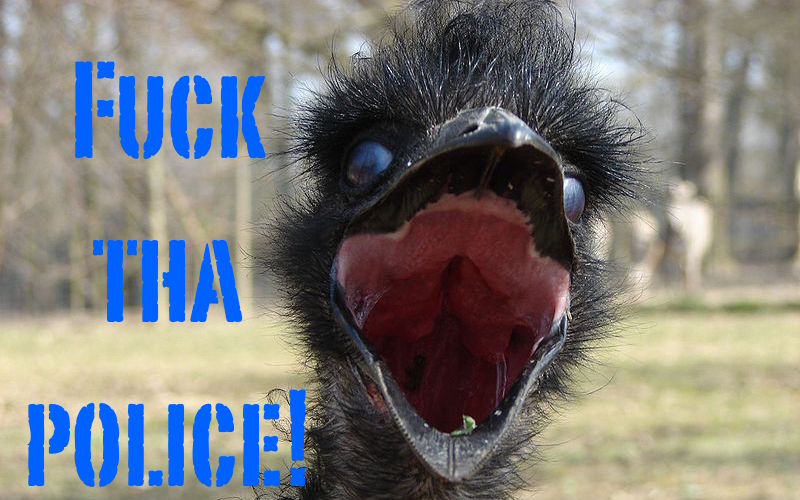 On Saturday, July 4th, a day we are told represents our liberty(s), an emu attempting to gain freedom from the animal traffickers whom had enslaved and imprisoned it, was taken back into captivity by the police. On a day when we celebrated our independence and secession from a cruel overseer that held our people captive for its own purposes and benefits, a brave emu attempting to do the same thing was made an example of for any animals getting funny ideas about independence and secession of their own.

Slave-hunters working for the Falls Township and Morrisville Police Departments in Pennsylvania were called to capture the renegade emu after its daring escape. After the re-imprisonment, the large flightless avian commented on the irony of his capture on this very day and gave statements on it’s plight, but preferred to remain emunymous.

You have no idea what kind of stuff happens in these emu trafficking centers. Birds are taken from their homes and sold to the highest bidder. We are then caged, harvested for eggs and our fine coats and slaughtered for a rare meal; as well as being laughed at by children, marginalized by passer-bys like some kind of freaks and made to endure endless comparisons to our ghetto cousin, the ostrich.”

The bird then went on to make allegations of psychological, physical and sexual abuse by handlers and other animals, as well as the slave hunters themselves.

Snipes Farm and Education Center? HA! More like Snipes Concentration and Propaganda Camp. These people have violated every right ever imagined by the greatest minds of the last several centuries. I thought that maybe if I tried my escape on a busy holiday weekend dedicated to freedom, liberty and -squak squak squak- they might just recognize how farcical it would be put me in a cage. But its like the llama said, humans just don’t get irony.”

The responding officers did not make things any better. Their attitude and treatment towards the emu indicated an absolute disregard for their lives and freedoms. They treated them like non-beings, with one officer even joking about their very existence. According to one of the human trafficking mercenaries:

I saw ’emu’ on my call log and emailed the guys to ask what ’emu’ stood for,” he said chuckling.”

There is nothing funny about bird enslavement. That shit is fowl. The plight and subsequent treatment of this particular emu subject is a potent metaphor for how lost the ideas behind Independence Day have become.

You are not free. You are an asset used as collateral on federal debts by which the bankers and other corporate masters use your own government to enslave you for their purposes. Like the emu, you are living your life on their farm for their power, profit and pleasure. Unlike the emu, you ironically celebrate your freedom while it is clear you have been re-enslaved dozens of times since that original day of independence long ago. The emu had the courage and conviction to at least attempt an escape. Will you? Or will cheap beer and things that go boom keep you dazed long enough for your own imprisonment to become a life sentence?

The whole world is just a big animal farm and the Uncle Tom pigs are our handlers.” said the emutional bird.