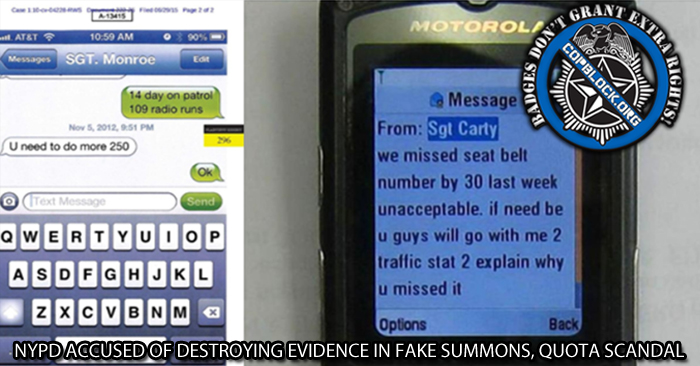 In new court documents filed against the city of New York, attorneys are alleging that the NYPD and city lawyers have destroyed evidence pertaining to a class-action lawsuit claiming officers have issued 850,000 fake summonses in order to fulfill illegal quotas.

Filed in Manhattan Federal Court, attorney Elinor Sutton states that the city has refused to turn over one shred of evidence regarding summons activity levied during the last eight years, and has removed electronic and physical communications about summonses in the files of three top NYPD officials.

“It is simply not tenable,” Sutton said, “that Commissioner Kelly and Chief Esposito did not – in the entire period of 2007 through the present – write or receive emails using [the] term ‘summons.'”

It wouldn’t be the first time quotas have been exposed in the NYPD. Earlier this year, officers in Brooklyn were accused of planting evidence on innocent people in order to increase gun arrests.

At the end of 2014, former Detective Stephen Anderson testified in court that fabricating drug charges on innocent victims to meet quotas was “common practice,” and often done to help fellow officers improve their arrest records.

In this most recent case, Sutton points to text messages (pictured above) from an officer identified only as Sgt. Carty, who chastised a fellow cop for not issuing enough seat-belt summonses.

“We missed seat belt number by 30 last week – unacceptable. If need be u guys will go with me 2 traffic stat 2 explain why u missed,” the message reads.

As part of the court filings, which are seeking sanctions against the department, Sutton has also produced emails from Capt. Andrew Benjamin, which show him bemoan the lack of arrests among his top Bronx Task Force overtime earners.

“This has to stop. It is ridiculous to have 50+ hours with only one arrest,” Benjamin said in the communication, before asking other superiors to monitor the arrest activity of four under-preforming officers.

Sutton claims lawyers were able to obtain the communications from whistle-blowers inside the department, and says the fact that officials have not been unable to produce copies of them as well, proves they were destroyed.

“The spoliation of this evidence clearly demonstrates defendants’ bad-faith, grossly negligent, or at least, negligent destruction of relevant documents,” Sutton said. “The [evidence] production confirms what plaintiffs feared but defendants have repeatedly denied: [that] defendants have destroyed evidence that is unquestionably relevant to this matter.”

Sutton alleges there exists an open policy in the department for the shredding of documents relevant to the case, and that “defendants have shredded, and are continuing to shred, hard-copy documents” from CompStat meetings where crime statistics are analyzed by top officials.

The case, which is to be heard by Judge Robert Sweet early next year, includes anyone who has been issued a criminal court summons since May 2007 that was tossed out of court because it was legally insufficient – or in others words – if the alleged offense did not articulate probable cause.

The NYPD has not commented on the case but city attorneys have said the allegations of evidence destruction are “short on meritorious claims.”

A recent investigation revealed that 18 percent of NYPD summonses made between 2003 and 2013 were dismissed due to legal insufficiency.