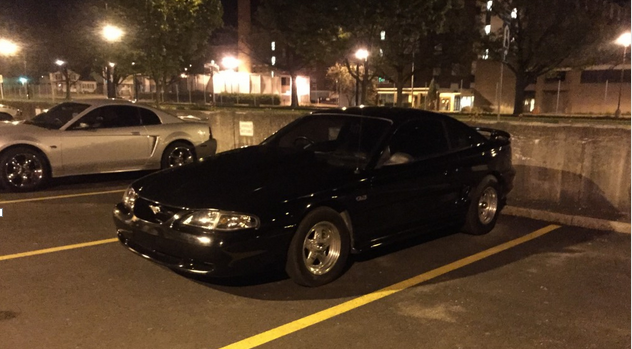 A few months ago I was in my Mustang getting pizza at 1am after a day full of hard work. I was pulled over for loud exhaust and window tint. My tint was slightly darker than the legal limit. I was given a ticket for the window tint.

A few days later I was riding my mountain bike past the Corning Police Station when I noticed that there were two Mustangs (In photo above) parked in their parking lot. Upon closer observation I noticed that BOTH of the cars had blacked out windows all the way around. I decided to pull into the parking lot and get pictures of these two mustangs that belonged to employees of the same police that had ticketed me for the same thing. Once I was up close I noticed that neither of the Mustangs had front license plates. I also looked underneath both of the cars and discovered that they had been running straight pipes.

This pissed me off. They pull people over all the time for loud exhaust, window tint, and no front plate while the cops are violating all of these laws on their personal cars. There was also another Mustang that I didn’t get pictures of.

I posted about this on several Facebook pages for various car groups and it got a lot of attention. The cops were pissed that I called them out publicly for acting like they were above the law.

For the last few weeks my Mustang has been parked because I was replacing my transmission. The first day that I was out driving the car, after I had finished this time-consuming work, I got pulled over in Corning, N.Y. I went to McDonald’s at 12am. The Corning Police saw my car parked in the McDonald’s parking lot and waited across the street for me to leave. The second I pulled out of McDonald’s, the cop came after me and pulled me over. He said that he pulled me over for loud exhaust, and for not using my turn signal when I was leaving the McDonald’s parking lot. He took my paperwork and came back later with three tickets. Failure to signal, inadequate muffler, and no rear view mirror. He noted that my mirror was missing as he went back to his car.

I was very polite and respectful to the officer until I realized that he was writing me three tickets as payback for my Facebook posts. Just before he headed back to his patrol car to leave he said “Oh and uh, by the way, just for future reference, there are people who monitor social media, so uh, yeah.”

The Corning Police department is out to make an example of me because I called them out on their blatant hypocrisy. In regards to the signaling, I was pulling out of a parking lot at 12:30 am onto a one way street. There was only ONE fucking direction to go. I already corrected both of the equipment violations, but now I must go to court to fight the failure to signal ticket.

It seems obvious that the cop had ulterior motives (revenge, show of bravado and force, personal attack) in writing me those tickets.