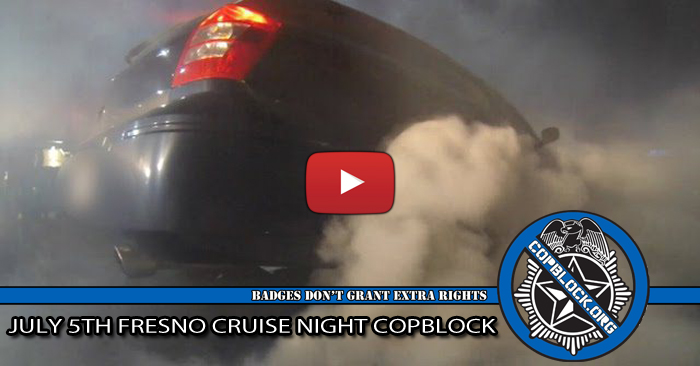 Every Sunday night car culture is alive in Fresno. Thats not the only thing alive: the police state is also usually booming that night, as the Fresno PD flood Blackstone Ave with traffic cops, and police cadets. The cadets sit in cruisers with lights flashing to keep people from parking in the business lots, and the traffic cops looks for any minor violation in which to steal your money.

Tonight was no different. I filmed 4 stops during the time I was out there. Usually there is a group of us, but tonight I was flying solo.

The first was a traffic stop, to make sure that all of the lights on the vehicle were working. The person got a warning after they proved the lights worked. The guy got a warning and the cop told me that it wasn’t going to be interesting to hang around and film. They make these comments to discourage me from filming them.

The second traffic stop was 2 young guys with a bagged truck. It appeared to be a routine traffic stop, but a few minutes in they pulled both the driver and the passenger out of the vehicle. One of the cops attempted to obscure my camera with his flashlight, while he attempted to ascertain what I was holding, followed by a request to step back, which I declined.

Traffic stop 3 was a BMW that got pulled for no headlights. The driver had a suspended license, and couldn’t prove insurance on the car. The Sgt. who pulled him over called one of his lackeys to write the actual ticket, while he hung around and watched.

I decided to call it quits, It was getting late and my companion had an early day in the morning. On the way home I passed up a red lincoln with hydraulics, surrounded by cops. They had the driver out on the ground in handcuffs. I hopped out of the car, and proceeded to film. One of the Sgt’s. approached me, and gave me some BS about not having the right to film him, and how I needed to move along. This is untrue, and another example of how the police will make stuff up in order to get you to follow their commands.

Every Sunday night Cop Block  Fresno is out on the streets holding police accountable and talking with people about how to exercise their rights when dealing with police. If you are interested in coming out with us to further the message that “Badges don’t Grant Extra Rights,” make sure to like the above linked Facebook page, and send them a message saying that you would like to get involved.

EDITORS NOTE: While watching the videos take particular note of how Brian handles and speaks with the officers. He remains calm while maintaining his rights. He is assertive and confident without becoming combative. And he remains fearless and and unintimidated while dealing with officers. These are all important things to remember when you film police. Having the right knowledge and attitude can mean the difference between successfully filming police and bringing their misconduct to light, or becoming a victim of the police state yourself.