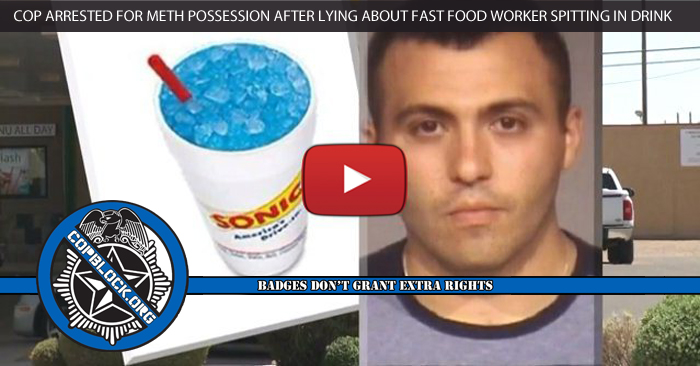 (ROSWELL, N.M.) A former Roswell Police Officer is now facing criminal charges after falsely accusing a Sonic employee of spitting in his drink. Shortly after the false accusation was made, Roswell police officers shut the restaurant down for two hours to execute the search warrant only to find that Officer Chris Ray Moreno had made the entire thing up.

Investigators checked the security cameras in the restaurant and found no evidence of wrong-doing by the employee in question. Saliva was found in the drink, but when investigators informed Moreno that they needed to test his DNA, the officer admitted that he had spit in his own drink because he didn’t like the employee.

Officer Moreno, knowing he would soon be fired, turned in his patrol car and equipment and then resigned from the police department. During a search of Moreno’s patrol car, police were surprised by what they found in the trunk.

In the vehicle, police found meth, pipes, a BB gun and several other stolen items that the former officer had kept from past cases. As a result, Moreno is not only facing charges of false reporting, malicious criminal prosecution, and tampering with evidence, but on top of those he is also being charged with possession of controlled substances and paraphernalia, receiving stolen property, and larceny. Roswell Police arrested Moreno at his home the next day.

On Thursday, Roswell Police Chief, Phil Smith, issued this statement about the investigation:

“We truly regret that a local business and one of its employees were unduly affected by this false allegation and the resulting investigation, and we offer our apologies. As a police department, our role is not only to arrest the guilty, but also to exonerate the innocent. We want to find and protect the truth.”

Moreno was booked into the Chaves County Detention Center and was released on a $5,000 bond.