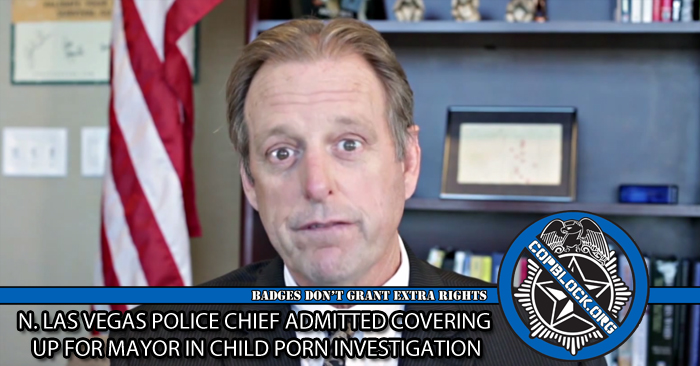 In addition, a week prior to approaching the officer about the iPad, the mayor made what was described as an odd request for help with “debugging a phone” in a voicemail to the Chief. As a result, some have speculated that the hacker sending an email story was just an excuse concocted to hide the true source, possibly amid fear that the incriminating material would eventually be found.

In a statement to the Las Vegas Review Journal shortly after his retirement, Former Chief Chronister stated that the detective assigned to the investigation did an incomplete investigation, didn’t follow up on inconsistent evidence uncovered during that investigation, and later took the mayor’s iPad to an Apple Store to have its memory wiped, before returning it to the mayor.

North Las Vegas police got the case after the mayor asked the department for help removing what he believed to be child pornography from his personal iPad. A detective helped out but didn’t check any of the mayor’s other electronic devices or press Lee on why his story didn’t make sense in light of evidence found, a police report filed last year shows.

Asked if anyone else would have been treated the same way, the chief said the short answer is no.

“We’re talking about the mayor of North Las Vegas,” Chronister said. “He is a person of authority. He is a person of power. He absolutely has the ability to control certain aspects of our department.”

That includes who the chief of police is.

Dooley also classifies Det. Hoyt’s trip to the Apple Store to have the memory wiped as “bizarre.” Instead, they should have consulted the District Attorney‘s Office to determine if there was probable cause to seize other devices and investigate if they contained similar material.

Las Vegas area police departments have been no stranger to sex based crimes lately, including two members of the LVMPD being arrested for child porn. Beyond that, another Metro detective was just given a light sentence after he attacked a prostitute when she tried to raise the price on him, yet another has been accused of sexually assaulting a woman during a domestic violence call, a Clark County Court Marshall groped a woman in court and then had her arrested for reporting it to a judge, and the former head of the Las Vegas Constable’s Office was caught covering up one of his underling’s illegal use of the department’s background check system to find personal information about his favorite adult film stars.

When you have police chiefs openly admitting that they gave special treatment to city officials and that that special treatment was predicated on the fact that “He is a person of authority. He is a person of power. He absolutely has the ability to control certain aspects of our department” that’s the kind of results you end up with. Especially when you pair that with a district attorney who’s literally never seen a police shooting he couldn’t justify. The fact that Former Chief Chronister could come out with an admission like that and not even really cause much of stir actually tells you a lot about “accountability” among the police and public officials in Las Vegas.