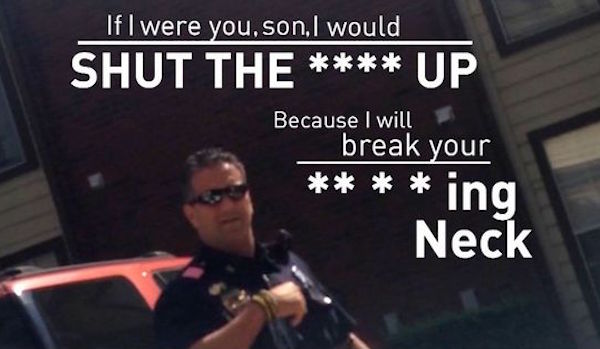 After a public records request, a video has emerged of Dallas Swat Team Officer Terigi Rossi cursing maniacally and making threats against a teenager. Rossi, who was a regular on the television show Dallas Swat Team, told the 14 y/o boy- “If I were you, son, I would shut the fuck up, because I will break your fucking neck.”

In his statement to internal investigators, Rossi said was using “verbal judo” to try to get information from the teen. He said that telling him he would break his neck was a “verbal technique that I’ve used to try to calm down people or suspects in my career with no intention of ever meaning the words I say.”

Rossi then continued with his grotesque ranting.

“I’m telling you right now, Get the fuck over here! Listen to me! You’re just like your mother. You’re a piece of fucking shit. You little [expletive].”

Rossi was removed from the SWAT team a few years back after he was caught sleeping on the job. This incident occurred not long after he was given a chance to prove he was responsible enough to return to patrols. Well, that didn’t really work out, did it?

An investigation also revealed that Rossi’s reports differ from accounts by another officer and the recording of the incident. IE: He fucking lied.

Despite the recognition by all involved that Rossi’s words and actions were not those befitting an officer of the law, he is still working in the same position and capacity as when this incident occurred. It is just a matter of time before this violent hothead causes serious injury or death to somebody. But I am sure that the ‘Good Cops’ will take of him before that happens, right?