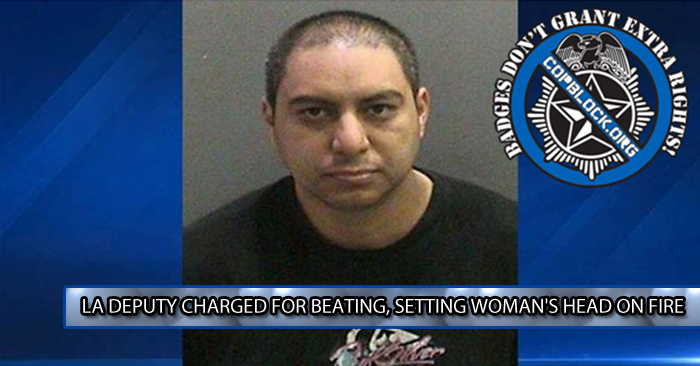 The violent aggression police officers consistently exhibit on the job often finds its way into their personal lives.

In one of the latest cases, Los Angeles County Sheriffs Deputy Alejandro Flores, 33, was arrested Monday for allegedly assaulting his girlfriend, lighting her head on fire and threatening her with an off-duty weapon – all in front of her 2-year-old child in their Buena Park home.

The unidentified victim alleged that following an argument about the child’s pacifier on June 28, Flores pushed her in to a wall, hit her, threw her to the ground, drug her across the house, held her over the stove and lit her head on fire.

Orange County prosecutors also say the woman alleges Flores threatened to hurt her if she reported him to police, took away her cellphone, threatened to shoot her, and turned up the volume on a television so neighbors couldn’t hear her scream.

Flores was charged with a total 9 felonies and and faces up to 25 years and eight months in state prison if convicted.

Those charges include: three felony counts of domestic battery with corporal injury, two felony counts of assault with a force likely to produce great bodily injury and a felony count each of aggravated assault, criminal threats, dissuading a witnesses and false imprisonment.

Officials also allege that Flores struck his girlfriend in the face, breaking her nose in an October, 2014 incident that was not reported to police.

They say Flores was first detained on June 30 and charged Monday, after the woman left home while he was at work and told two relatives what had happened.

The family members reported the officer to police.

Flores has since been released on a $50,000 bail but his arraignment, which was scheduled for Tuesday, has been delayed until Aug. 3.

The startling claims have enraged citizens who are now calling for the deputies immediate dismissal from the Los Angeles County Sheriffs Department, who have not yet offered any comment on the allegations.