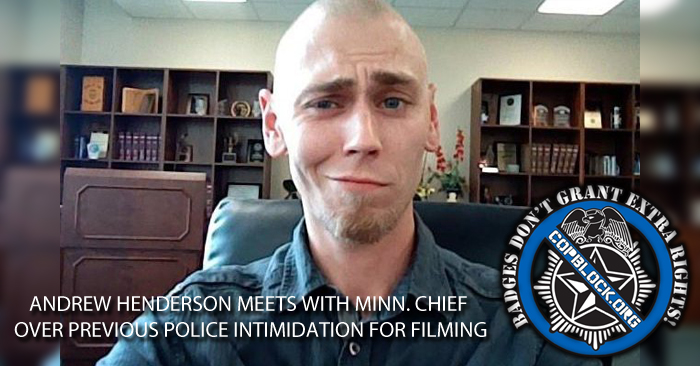 Recently, Ademo posted about an interaction Andrew Henderson, a CopBlocker from the St. Paul area in Minnesota, had with a police officer who had tried to intimidate him because he was filming near a police station. This happened shortly after the St. Paul Police Department held a seat belt enforcement campaign that was really just a thinly veiled opportunity for revenue generation.

Knowing that many police themselves don’t wear seat belts when driving, Andrew decided to go down to a location near the police station and film to see how many he could find disregarding the rule that they had just placed such a heavy emphasis on for regular citizens. Not surprisingly, he had no problem whatsoever spotting officers hypocritically ignoring the seat belt law.

Not long after, an employee of the St. Paul Police Department, Officer Alba-Reyes, drove up to where Henderson was filming. During the interaction between Alba-Reyes and Andrew (which can be viewed in its entirety in the video below), the officer misstates several laws, including that he has a right to detain Henderson for filming and that the public sidewalk is actually private property. He then threatens to arrest him “if he continues trespassing on private property.”

About a month later, Andrew had a meeting with St. Paul Police Chief Tom Smith concerning this incident and the behavior of that officer. This included several inconsistencies and omissions within the official police report that was filed by Alba-Reyes. However, it apparently didn’t include an update on the St. Paul Police Department’s investigation into whether public sidewalks are in fact public or private property. (Make sure you check out Andrew’s YouTube channel for lots of great informative videos.)

During my meeting with Chief Tom Smith, I expressed my concerns on my encounter with officer Armando Alba-Reyes while…

During my meeting with Chief Tom Smith, I expressed my concerns on my encounter with officer Armando Alba-Reyes while recording police officers from a public sidewalk.

The encounter can be viewed here: https://youtu.be/ONQXJjY_Yfk?t=4m38s (Also embedded below – editor)

Chief Smith understood my concerns, but could not give me answers as to why Officer Alba-Reyes report was not entirely factual or what happened to the photos he took of me.

I encouraged Chief Smith to adopt a policy regarding citizens filming law enforcement officers as recommended by the Department of Justice (http://www.justice.gov/…/spl/documents/Sharp_ltr_5-14-12.pdf), in addition to submitting a couple of policies to him and his staff from other agencies such as the District of Columbia Police Department (https://go.mpdconline.com/GO/GO_304_19.pdf) and the Department of Homeland Security (http://mocek.org/…/2…/06/DHS-FPS-Bulletin-HQ-IB-012-2010.pdf), as well as case law about citizens First Amendment right to document law enforcement personnel engaged in their public duties (http://media.ca1.uscourts.gov/pdf.opinions/10-1764P-01A.pdf), and to better train officers on engagement with those who chronicle police occurrences.

I hope Chief Smith will take this opportunity to transition and advance with this paradigm shift in policing.