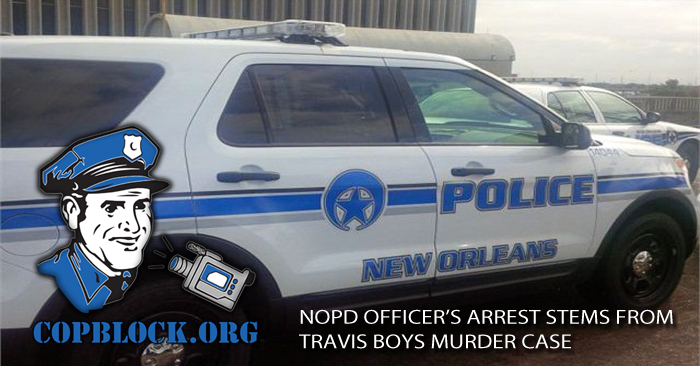 If you’ve been watching the news, browsing online or even reading one of those (what are they called? OH..) newspapers, you may have heard about Travis Boys. He’s the man that was being transported to jail when he suddenly produced a gun, killed Daryle Holloway (a NOPD employee) and remained on the run for nearly 24 hours. Since the shooting NOPD’s higher ups have been scrambling to make sense of these bizarre events. They immediately started to retrace the steps of Boys’ arrest earlier that evening on aggravated assault charges.

That lead the investigators to Wardell Johnson and Ryan Morgan, who were the officers that arrested Boys that night, and after reviewing their body camera footage the investigators noticed a number of things wrong with the officers procedures. First, Johnson attempted to leave a .40 caliber round behind and failed to log another full box of ammunition. These procedural mishaps are in addition to the much larger concern of Johnson’s poor pat down, which investigators believe lead to Boys’ ability to murder Holloway. According to WDSU.com Superintendent Michael Harrison said he is both “disgusted” and “appalled” by the actions of the 12-year veteran police officer who was arrested. It’s easy to see why, from the WDSU article:

Johnson recovered a box of unused .40 caliber bullets at the scene, but failed to process the box as evidence in the investigation, the NOPD said. Detectives interviewed Johnson about the discoveries on Monday. He told the detectives that he did not remember where he left the box of bullets and wasn’t able to tell them why he chose to not report the box of bullets at evidence.

“Based on the evidence, we were able to follow Officer Johnson for awhile and observe him when he left the Public Integrity Bureau yesterday and he threw that box of bullets out of the window,” Harrison said Tuesday morning.

The NOPD said Johnson was placed on emergency suspension and arrested Monday. Johnson’s charges are criminal and he could face additional administrative charges based on the ongoing investigation. Harrison also said investigation into how Boys was able to shoot Holloway is still under investigation, but that there is no evidence to suggest that Johnson assisted or knew Boys.

According to the NOPD, Morgan will not face charges. Harrison confirmed another officer, identified as Jeardine Daniels-Sparks, is being questioned for her role in the Boys investigation. Additional details were not provided about Sparks.

This story has even me going back and forth. Is it good that the police department is taking actions against one of their own for stealing, lying and putting others at risk? Yes, of course that’s a positive. Yet, police employees are routinely caught taking evidence, lying during their jobs and conducting their procedures in a lazy manner. Usually those committing such crimes don’t get much more than a slap on the wrist.

Even Harrison didn’t go as far as to say that Johnson’s acts were criminal, although stealing is clearly just that, instead choosing to state that Johnson had an off day or was- “lazy.” So on one hand we have an officer being arrested and charged with crimes – which is good; yet on the other hand you know that this wouldn’t be the result if Halloway hadn’t been killed – which is definitely bad. Stealing and lying are still wrong without the unfortunate death involved. Had Halloway not been murdered Johnson most likely would have had a free box of bullets, made an arrest and went on with his career for another 20 years.

It seems today’s police officers are better off killing someone than they are for other smaller or less violent crimes. Compare Johnson’s actions, of stealing and being lazy, to that of Darren Wilson (who killed Mike Brown) or Timothy Loehmann (who killed Tamir Rice). Then realize that Wilson and Loehmann never faced any charges of any kind (to this date). Once you see this it’s hard to applaud the actions of this department while knowing the imbalance of justice amongst the ranks of police.

To be clear, the justice system does this to everyone. Those with money, friends or from a different geographical location are routinely given different punishments for the same ‘crimes.’ The question is how much longer are you going to allow the police and justice system to so severely tarnish these services? Since sooner or later we’re going to have to replace these toxic systems we might as well start thinking of the possibilities, and by we, I’m talking about LEO’s too.

This issue is just not being recognized amongst police even though it’s been prevalent in the justice system for a very long time now.