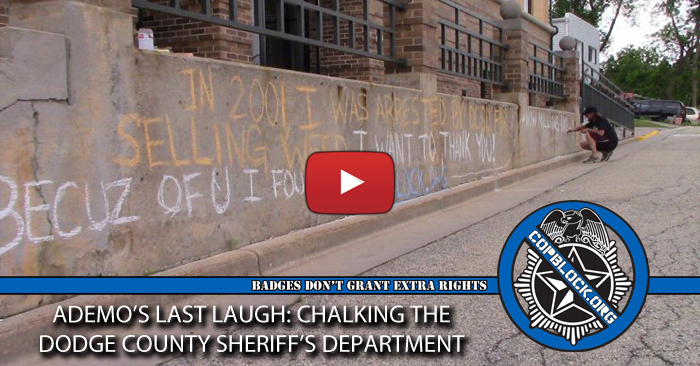 It was late October of 2001 (I was 19 years old) and I was on my way back from meeting my friends in Madison, in my car was nearly 5 pounds of marijuana (and I had just dropped off another 5 pounds with a client). I had been selling weed for nearly four years and this was just any other day. As I took the exit ramp to head towards home I noticed two cars on the side of the off ramp. I paid them no attention until I noticed the four door Ford Explorer in my rearview mirror. Only now it had activated police lights going. This was the start of what would become a turning point in my life, but if you had asked me then, I would have told you I thought life was over.

After being arrested, booked and jailed, I was told (by the cops, my lawyer, and family) that the only way out of this situation was to cooperate with the police. I was told that all my friends were flipping (or had flipped), that I was going to jail for 10 years and that if I didn’t “playball” I would pay the price while others took sweet deals. This was the first time I was ever in any kind of serious trouble, so I decided to cooperate with police. None of us ever had to actually testify against each other because everyone involved took a plea deal, including myself. At that time, I thought I was doing what everyone else was doing, saving my own ass.

Yet, as the next three years played out and I served my time in jail (3 months), started probation, and did community service, I came to realize something. That what I did wasn’t nearly as bad as what the police had done to me and continued to do to others. I started to see that the officers didn’t stop the flow of marijuana into the area. They merely changed who was bringing it in. I realized that I had never forced anyone to do any business with me, never used guns during my interactions and was always honest with people at all times. The same couldn’t be said for police who used confidential informants, undercover agents and guns in their processes to stop me from selling a plant peacefully to other people.

Though I came to these realizations and thoughts before my probation ended, I was way to scared to do anything about them. I was stuck in the system that was doing everything it could to put me back into the rotation. I did my best just to keep my head down and get by in life. This was difficult to do since I was now labeled as the “big bad dope dealer” and had a criminal record. Just getting to work was a task in itself because the state had not only taken my driver’s license, but also mandated that I maintain employment.

It took four years, the sale of my house, nearly all my possessions and a move out of the area to finally free myself from the police grasp that was being put on me. Luckily though I didn’t stop asking questions and seeking the truth. A few more years down the road and I come to find this guy name Ron Paul. He says things I’ve never heard another politician say about the war on drugs. He opened my eyes to the harms of government as a whole. Until then, I only thought the justice system was broken, but this started me down a new path.

From there I absorbed everything I could about freedom, liberty and the pursuit of happiness. This journey of absorbing knowledge lead me to meet and travel with Pete Eyre, who would later help me co-found CopBlock.org, & Jason Talley. The year I spent with them both in a RV traveling the country doing MotorHome Diaries provided me the skill set needed to launch CopBlock.org.

I didnt’ know it then, but that knowledge was the last piece of the puzzle I needed. That’s what allowed me to launch a website where I could share my experiences with police. The year I spent with Pete and Jason had taught me the power of social networks for websites. I decided to put this newly found skill to use and launched CopBlock.org. Almost immediately, due to the past projects and friends I made while traveling, people started to contact me about sharing their stories. This was early 2010, nearly 9 years after the arrest that started this ball in motion, I remember that day like it was yesterday.

Since 2009 I’ve been back to Wisconsin less than 6 times and never near the Dodge County Sheriff’s Department. I would frequently talk about stopping by there to say thank you to the officers who arrested me, for giving me the motivation and inspiration to start CopBlock.org, but I’d never found the time to do so. Until our trip last month to Iowa for the Ryan Bolinger Protest where afterwards we decided to take a 4 hour detour and stop in Juneau, WI where the Dodge County Sheriff’s department is located.

Sadly, it was Sunday so I couldn’t wander the hallways looking for the actual officers that had arrested me so many years ago (maybe I’ll get to that some day) but I did bring chalk with me. I decided I would chalk them a thank you message, shoot a short video and grab a selfie. That’s until Deputy Scott of the Dodge County Sheriff’s department decided to step outside and ask me about the chalk. Below are both videos of the interactions I had with several officers who came to see my wonderful chalk display.

I’ve titled the videos, and this post, “Ademo’s Last Laugh” and there’s a reason for that. One time when I was being transported to a hearing for one of my arrested co conspirators I asked the cop transporting me, “Do you think you’re doing any good here? It seems like this is all just a big joke?” He said, “I don’t know but we always get the last laugh.”

If I could talk to that guy today I’d say, “Not today, man, not anymore.” For many years I carried the weight of being called a snitch (when we all took deals and made statements), feeling guilty for having let the justice system run over my life like a freight train and being powerless to do anything about it. I still regret taking the plea deal, working with the police and I can only hope I live long enough to right the wrong from those days – as I’ve said many times over. The Dodge County Sheriff’s might get the last laugh most of the time, but right now millions of CopBlockers are laughing at you. Had you not arrested this peaceful pot smoker nearly 15 years ago, this website might not exist. (Let’s not joke, it would. The police fuck up too many people for this site not to have been created.) Yet you did and I’m laughing at the irony in that. So again, “Thank you Dodge County Sheriffs. Because of you, millions of people know about the police state, their rights, and ways to fight back against tyrannical police.” Hopefully, you motivate and inspire a few more people before the government funded service of protection crumbles under its own weight.