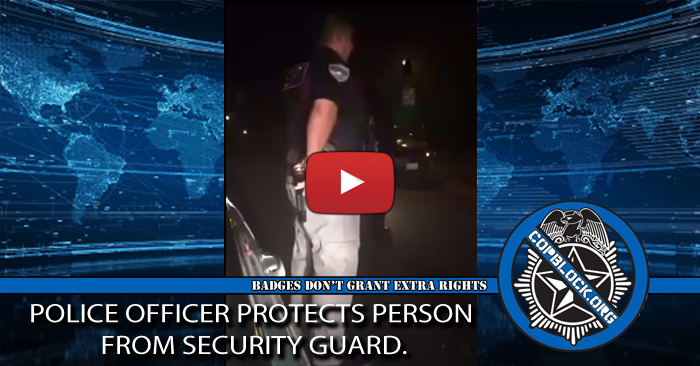 A short but powerful video posted to Facebook shows a police officer chewing out what appears to be a security guard. Although the man is wearing a sidearm, and carrying a flashlight the context provided about the constitution, and him not having to swear an oath to it makes it clear he is not a sworn law enforcement official.

I’m not too clear on exactly what happened, but on the 4th of July a police officer actually for once protected someone. Two or more individuals watching fireworks in the street were accosted by a security official of some capacity. When a local police officer intervenes with a powerful monologue about the constitution.

He tells the security guard…

“There is a constitution that I swear an oath to, so don’t freaking mess with it with these citizens. Do you understand me? I know you aren’t subjected to the constitution when it comes to your job, but don’t mess with it.” He goes on to remind the guard of three fundamental rights that fall under the 1st, and 4th amendments.

Once again, I’m not too sure what happened to start all of this, but if this cop will take it to the next level, and remind the officers around him of their oath’s, and fundamental rights of the people they claim to protect, as well as publicly outing any corruption, we might be on the right path to some actual transparency.

Don’t hold your breath. Until I see this cop calling out other cops, I know I won’t.