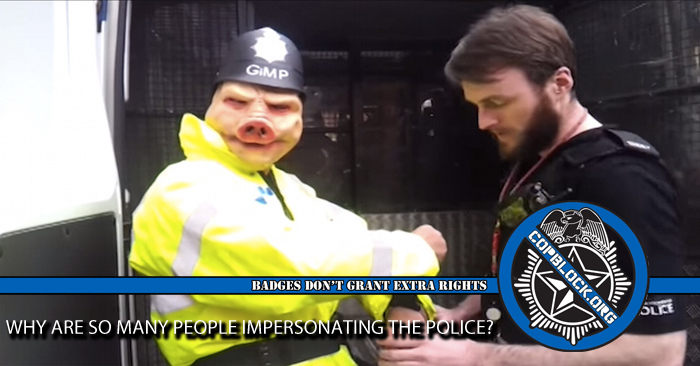 There have been numerous stories recently of people who impersonated a police officer for one reason or another. As I am constantly seeing these stories I am left to wonder a few things.

Why does it seem that police do not understand why individuals might not surrender immediately to them when it is possible they may not, in fact, be a police officer?

The widespread skepticism of claims to authority was nudged awake when Trayvon Martin was murdered by a man, George Zimmerman, who asserted a position of unwarranted authority over the young man before killing him. Although it is not clear if Zimmerman represented himself as acting in any official capacity, it does raise reasonable doubt in the public over whether claims of authority should be immediately yielded to.

Any body could counterfeit the costume or credentials necessary. Yet besides those impersonating the police, there are plainclothes police that raise skepticism in citizens. When dealing with a clearly aggressive individual making some claim to authority over your life and actions, it is only natural to be skeptical and defensive. These are the instincts of self-preservation we are all endowed with on our earthly arrival.

And when you are told that cops are great all of your life, seeing a cop act like a complete maniac may provide so much cognitive dissonance that it becomes nearly impossible to recognize actual authority as such. In cases where the person has not committed any crimes, or at least unknowingly or merely petty victimless ones, believing the crazed and costumed (or not) guy with a gun may not be quite right is incredibly reasonable. Add fear, anxiety and the intensity of the situation, and there is little doubt that a cops identity or actions may often be in question for very good and rational reasons.

This is why it is important that police first make the greatest possible attempt to de-escalate every situation, so the facts and perceptions of both sides can be clarified in hopes of coming to a peaceful resolution. It is also why it is absolutely necessary that any officer immediately complies to any request for information about the officer, as per our guaranteed rights. No officer should assume that their status is clear to, or understood by, any subjects they are dealing with. There are reasonable grounds for any body who even casually reads the news to be unsure if the person asserting authority and/or aggressing towards them in a heated situation is actually legally authorized to do so.

Although it may just be that police impersonations are now being more widely reported, despite historical comparisons, it seems to be a fairly common issue. So, why are so many people impersonating police officers?

From the standpoint of the impersonator, if you can get away with it, the opportunity to be above the law may be irresistible. Whether the person just wishes to exercise authority and dominion over others, or plans to use the special police powers to commit a crime, the appeal is the same. Those special police powers that allow police to act above and outside the law are an intoxicating lure. No other position in society gives you the ability to act without concern for laws and social values. Which, when you think about it, is the same reason many people decide to become actual police officers.

This should raise a red flag for anyone fond of critical thinking. Should there ever be a position in society that grants certain privileged individuals access to behaviors and justifications beyond the ken of their fellow citizens? Are some things just so powerful that they are not worth their price no matter what else they may accomplish? Can we really have any reasonable expectation that we can create systems and institutions with such incredible capacity for exploitation and abuse and not see them veer towards their most obvious outcomes? Do we dare to create for ourselves a super-virus in order that it may kill some less powerful viruses?

Though we can clearly see why the attraction of impersonating (and/or being) police would be so prevalent amongst the unscrupulous, how is it that they can so often get away with it? The chances of succeeding must be high enough that the gambit is worth a try. What makes it so easy, then? Are people just that stupid?

So when we are barraged from birth with a manufactured message about police and other forms of authority, a message that speaks of the idea or symbol constructed from official narratives and not the actual reality of those systems, we become susceptible to a sort of unconscious faith in them. By having absorbed a lifetime of signals regarding what authority should be, we often become blind to what it actually is. We have created a proxy or analog of authority that is constantly being validated by new information. Media and government officials constantly confirm the righteousness of these idols. Before long the actuality of authority is replaced by dogmatism, making truth and its proponents the perceived enemies of society.

After enough time has passed it is not even necessary to intentionally reinforce this fallacious worldview, or for it to be steered by conscious will. Belief itself creates perpetual motion, especially where a feedback loop of confirmation bias is firmly in place. The widespread ideology of the infallibility of police and other authoritarians becomes a sufficient fuel for feeding the fires of the police state. There is likely no longer anybody responsible for doing this left, it is just happening. We are caught in the ideological momentum of faith in authority so thoroughly that it cannot be stopped from within the system. An object in motion will remain in motion until an external force acts upon it. The object will, of course (if it has even the slightest instincts or volition), attempt to circumnavigate collision with such a force, yet the impermanence of all things means that it will eventually become necessary or inevitable.

There is currently so much momentum behind these authoritarian ideologies that they have made us vulnerable to the very problems they claim to exist to alleviate. Our faith in authority makes us sitting ducks not just for abuse by those who would imitate it, but by the thing itself. The most likely reason people seem to be increasingly impersonating police is probably just a by-product of an unwavering faith in authority itself.

Perhaps we should learn to see the trend of impersonating the police for what it really is, a harbinger of just how shaky and subject to abuse and corruption our system intrinsically is. And even more alarming, how much worse it might become. It already has an unknown, yet vast, amount of energy stored in its momentum. Energy is never lost, but only transferred. Left to itself, this systemic authoritarian machine is heading for a grand collision with reality. We can blindly await that impact or we can can begin transferring that energy ourselves, consciously, into new paths.

It is understandable that so many have been asleep in the dream that was long ago created for them. Let us not blame those caught in this perpetual destruction machine, but rather try to awaken them by whatever means possible. The future of humanity is at stake. Fighting the police state is not a fight against an enemy. It is a struggle within our collective beliefs to escape our path to destruction in order that we may instead become mutually creative guides in a peaceful evolution towards our highest potentials.

Authority is not a safety net. It is an anchor that keeps us from being swept into the deeper waters of chance and choice. It was once a serviceable device for allowing our civilization to safely dip our feet in and test the waters of this existence without being dragged out into the deep too quickly. There comes a time, however, that if you plan to be in this ocean of infinite possibilities for awhile, you better learn to swim for yourself.