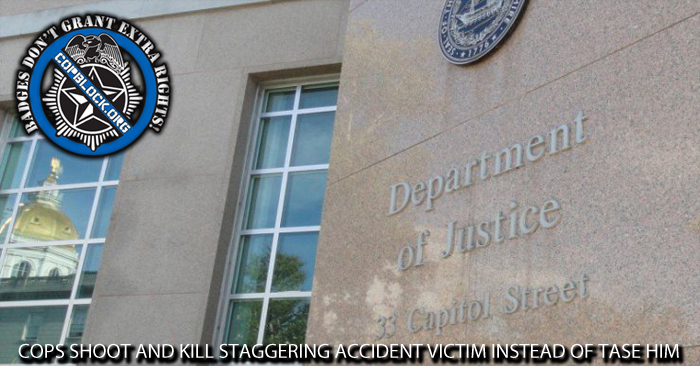 It’s all in the article. Police responded to an accident and found the guy stumbling down the road with a knife. They asked him to drop it, but he supposedly “lunged” at them instead. Body cam footage has not been released. Two highly trained officers, with a gun on one side and a taser on the other, both opted to use their guns rather than their tasers. As a result, a man is now dead.

They approached him as they found him staggering down the road. THEY chose how close to him they would get. He had just been in an auto accident. How dangerous could he really have been? Seriously, what are tasers for if not for situations exactly like this? Deadly force was ABSOLUTELY NOT necessary in this situation. Please help shed some light on this incredibly fishy story. Thank you.

As reported by WMUR:

A Canterbury man died of a gunshot wound Monday after he was shot several times by police in Bath.

The Attorney General’s Office said Hagan Esty-Lennon, 42, was shot by two Haverhill police officers six times in his trunk and head, but a wound to his shoulder was fatal.

“They encountered him, and he had a knife in his hand. They asked him to stop, [but] instead he turned, proceeded to walk in a different direction and almost immediately turned back and lunged at the officers and they opened fire, striking Mr. Esty-Lennon,” said Jane Young, the assistant attorney general.

“The medical examiner determined that the cause of death was one bullet wound to the right shoulder,” said Young.

Officials said the investigation is ongoing, but the officers were wearing body cameras that documented the incident. Officials said Esty-Lennon was carrying a knife when he walked toward the officers and lunged at them before they opened fire.

Haverhill was one of the first small town police departments to implement body cameras for officers. These cameras, along with a dashboard camera, helped the Attorney General’s office to determine what appears to have happened.

“Prosecutors from the Attorney General’s office have reviewed those, and the information in the press release is based in large part to interviewed witnesses and reviewing those camera angles,” said Young.

Investigators said Esty-Lennon appeared to be bleeding from a stab wound on his chest when he approached the officers. Officials said the videos show that the officers ordered him to drop the knife, but he ignored the orders.

Witnesses said the incident began about 4 p.m. when Esty-Lennon tried to drive a blue Jeep over a bridge over the Ammonoosuc River, at the intersection of Routes 112 and 302, that had been closed to vehicles for years.

He had to push large rocks out of the way in order to drive onto the bridge, and he crashed into rocks on the other side, witnesses said.

Witness Chris Monette, a volunteer firefighter who lives nearby, said that when he arrived, a crowd had gathered on the bridge.

“There was an individual that I was told was driving the vehicle,” Monette said. “I did not see him driving anything, but I was told he was the driver.”

Monette said the man was lying on the ground.

“He appeared shaken up and slightly disoriented, but other than that, after a car accident, nothing out of the ordinary,” Monette said.

Monette said that while he was talking on the phone, he heard a commotion.

“I heard the group that had gathered say he had gotten up and was walking away,” he said. “I turned to look, and he was in fact walking away.”

Monette said he saw the man walk back across the bridge and then up Route 302. One witness said she heard what sounded like firecrackers.

Esty-Lennon’s death has been ruled a homicide.

The Attorney General’s office will continue its investigation and will be conducting additional interviews in order to determine whether it was a justified police shooting.