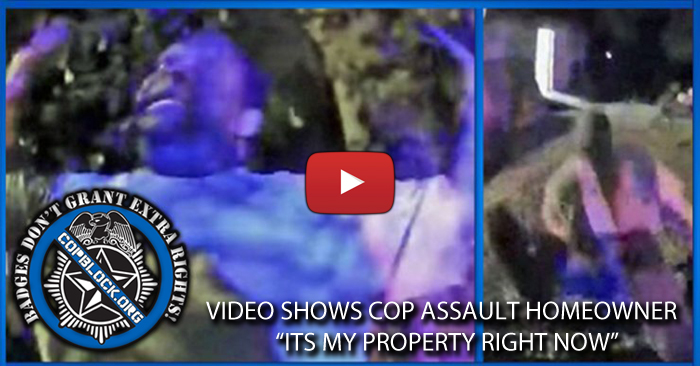 Body-cam footage has emerged showing a southeast Texas police officer assault a homeowner like a feudal serf after being asked what he was doing on his property.

Orange, Texas Police Officer Dylan Mulhollan pulled over a man on a bicycle for “riding without a reflector” on Ronald Warnell’s property on February 2nd of this year.

Warnell asked the officer what was going on and an exchange ensues resulting in the officer shoving the man to the ground.

The body-cam footage shows the officer ask Warnell to back up before the man suggests calmly, “Hold on man, you’re on my property now.”

“No, No, its my property right now,” Mulhollan responds.

The situation escalates before the officer angrily says, “[The biker] pulled on your property. I followed him on a traffic stop, now back up!”

The men continue to argue before the officer tells Warnell to put his hands behind his back.

Defiantly, the mans responds, “no.”

Mulhollan is then seen on the footage shoving Warnell to the ground and pouncing on top of him.

“All of a sudden, he just bum-rushed and knocked me down,” Warnell said. “[I] almost hit my head on the concrete, and [then he] started to wail on me.”

Warnell added, “the only thing I can tell you [is], if I was in a different neighborhood, a different color, and I came outside on my property and inquired what was going on, this never would have happened.”

Civil rights attorney Daryl Washington said Warnell had every right to find out what was happening on his own property.

“It was a situation that any police officer should have de-escalated,” Washington said. “But [the officer] escalated it.”

Orange Police officials have also condemned Mulhollan’s actions and say a review of the incident is underway.

“An officer should be expected to communicate with citizens without seeing every citizen as a criminal or a threat,” Capt. C.A. Stephenson said.

He added, “even after being shoved to the ground and being struck in the face, Warnell was never abusive or threatening, but was still wanting to know why he was treated the way he was when he was only trying to find out what was happening on his property.”

Warnell is now taking civil action against the officer.

Property rights are the most sacred and trampled upon of rights – many would say, the only “legitimate” rights.

In a supposed “capitalist” county where literally all of the central tenets of communism have been realized, the right to assert dominance over what one has rightfully claimed exists now in name only.

Among other things, private property serves as a barrier to government intrusion.

Some codified remnants include the controversial Castle Doctrine – part of American common law derived from the English system. Under English law, a man’s home was his castle. In the home and on one’s own property, under British rule and in present-day America, individual rights are supposed to be “nonnegotiable.”