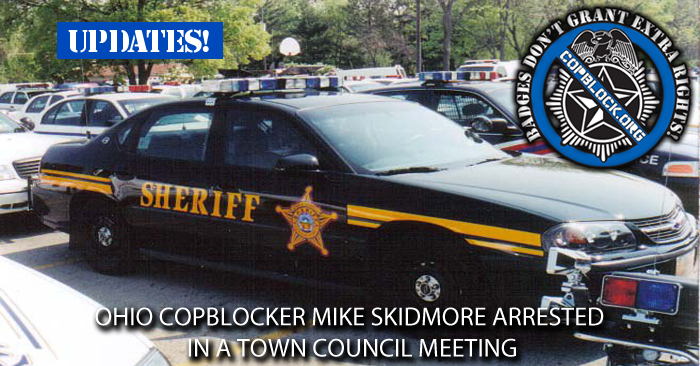 Earlier today, we reported that Mike Skidmore, a CopBlocker from Ohio, had been arrested in Mansfield after what had been described as a “scuffle” at a County Commision meeting. Since that time, new information has become available that indicates this was not some minor scuffle. In fact, Mike was physically assaulted by security guards, during a dispute over whether meeting are required to be public. One of those security guards pulled his gun out at some point. That gun subsequently went off inside of a crowded room at the Richland County Administration Building. The actual confrontation appears to have been caused by employees at the admin building hiding their nametags in order to conceal their identity.

According to Photography is Not a Crime (PINAC):

One county employee, the secretary who records the meetings, turned her name tag around, prompting Skidmore to stand up, hold his camera close to the tag and attempt to take a photo.

And that prompted Richland County Commissioner Marilyn John to accuse Skidmore of inappropriately touching her, which led to another woman walking out of the room to beckon the security guards.

The security guards then walked in and made their way directly to Skidmore, who placed his hands around his camera to protect it.

“They attacked him,” said Connie Garber, the citizen who had asked about the name tags.

“They didn’t say, ‘you’re under arrest,’, they didn’t say, ‘give me your camera,’ they just went over there and started attacking him. They started beating on him and had pushed him into the corner. I walked to the other side of the room because I did not want to get hit.”

Once across the room, she saw Skidmore’s arms were up when the gun went off, which was when she ran out of the room.

Initial rumors were that they were going to accuse him of “reaching” for the guard’s gun, which is what led to the discharge.

But Garber said Skidmore’s arms were up in the air while they were attacking him, which was when one of the security guards pulled out his gun.

“His arms were way up high,” she said in a telephone interview with PINAC. “There was no way he could attempt to grab the gun.”

Mike has a history of filming during public meetings and other times while conducting business at government buildings and has had previous confrontations with security guards while doing so. In addition, Connie Garber, the witness quoted in the PINAC excerpt above, is the mother of an unarmed man that was killed by Mansfield police last year. Those security guards are actually retired Richland County sheriff’s deputies, which is the same department that killed Garber’s son.

Plenty of questions remain at this point. Not the least of those questions is why a guard felt the need to pull a gun out in a crowded room, especially if Mike was already holding his hands above his head. Although, we don’t know the exact number of security guards involved, but it’s pretty apparent they outnumbered Mike. He obviously was unarmed at the time, so there should have been no reason to endanger a room full of people in that way. The fact the gun actually did go off more than proves the point of how senseless an act that was.

Once again, we ask that you call and/or email to ask what the situation is with Mike Skidmore and to put pressure on them to release him and his camera equipment with all video intact and drop any charges against him:

And as before, stay tuned for updates as they become available!