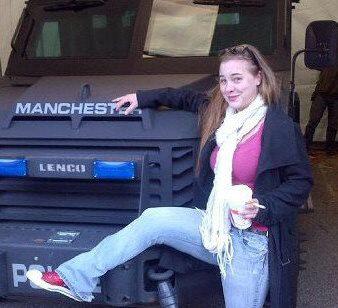 Folks in Keene, NH have been buzzing about the arrival of the “Rescue” vehicle – know as a Bearcat – which was “given” to the Keene Police department thanks to a Department of Homeland Security grant. After blowing off a batch of petitions, the city council (well one councilmen) decided to ask for a hearing – which will take place tomorrow night. Ian Freeman, blogger and radio show host, wanted to show Lenco’s (the manufacturer of the bearcat) promotional video for the armored vehicle. Today he reports on FreeKeene.com that:

I was told today by city staff that I would be disallowed from showing theLENCO video promoting their BEARCAT attack vehicle.

LENCO’s head salesman, Jim Massery admitted on the phone today that he didn’t think it should be shown to the council as it’s intended to market to the police.

Of course, that’s the point. LENCO is not marketing the BEARCAT to police as a rescue vehicle, as the council has been told. The councilors should see how this monstrosity is being promoted. If you haven’t, please watch the video that the city attorney doesn’t want you or the city commission to see. (Also, note that LENCO changed the permissions on their video to make it so it is not searchable and also so it can’t be embedded on other websites…like this one.) Then come out on Thursday evening and speak out against it. It’s our chance to reverse the deal and say, “Thanks but no tanks!”

LENCO’s head of sales also said he’d be attending the Keene committee meeting, which tells me LENCO doesn’t quite think they have this sale in-the-bag.

A short while later, Ian publishes another blog stating the video had been removed:

LENCO has pulled their BEARCAT promotional video offline completely. In the video, militaristic cops fire weapons, release gas into a home, and do other maneuvers that prove this product is NOT marketed as a rescue vehicle, all to an AC/DC soundtrack.

Isn’t it interesting that LENCO decided to pull the video offline this week? Do you think they’ve ever experienced pushback from a community like they have from Keene? They REALLY don’t want the city council to see this.

Luckily someone was on the ball and ripped the video before Lenco removed it. Below is Lenco’s promotional video with an added intro and outro by me.

Editor’s note: Shall we start the pool on how long it takes LENCO to report this video to YouTube (please mirror it if possible).