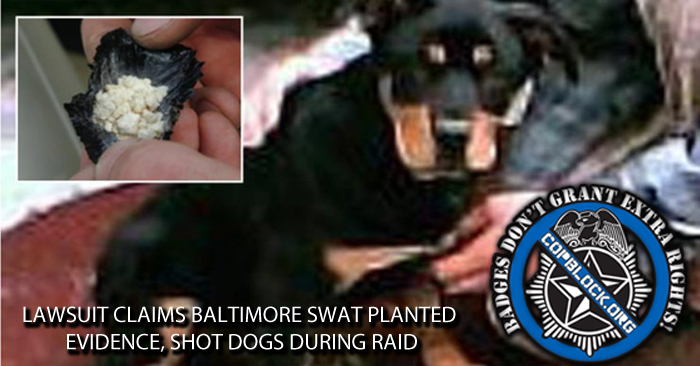 A Baltimore woman is alleging in a lawsuit that officers with a city police tactical unit shot her dogs and framed her boyfriend during a trumped up drug raid, all in order to help their informant friend get back at her for breaking up with him.

Jennifer Catalano says a seven-man squad from Baltimore’s Violent Crimes Impact Division raided the home she shared with her boyfriend near Grindon Avenue on the night of June 13, 2012.

According to the lawsuit, the raid was contrived by a confidential police informant with a criminal record with the help of his friends and handlers, Detectives Timothy Johnson and Edgardo Hernandez,  in order to ruin the woman.

Catalano claims she ended a relationship with Terry Hubbell after her high-school sweetheart contacted her on social media and the informant became “increasingly abusive and threatening.”

Hubbell has been charged in over 30 cases since 1988 and currently has a warrant out for his arrest on in Baltimore County for theft. Over the years his charges have also included drug possession, identity theft, counterfeiting, forgery, unlicensed contracting, malicious property destruction, and arson – but the vast majority of those charges were dropped.

After Catalano had moved back in with her ex, she says Hubbell became “angry and agitated,” and began sending her threatening messages saying she would not want him as an enemy.

The lawsuit alleges that officer Hernandez took an affidavit before a district judge claiming that “Confidential Informant 3633” – Hubbell – had bought cocaine from Catalano’s new residence in a “controlled purchase.” After obtaing a warrant, the seven-man VCIS unit broke in with a battering ram and shot two of three dogs, killing one.

Officers found no drugs or other contraband during their search, the lawsuit claims – and police, after growing angry, exited the home and returned from the back porch with drugs supposedly found in a flower pot.

“We had a flowerpot hanging from [a] hook,” Catalano said. “That’s always what drug dealers do, right?”

The drugs tested positive for heroin but tests preformed by Baltimore Internal Affairs gleaned that neither Catalano or her boyfriends DNA was found on the drug bag.

Catalano says she wasn’t even home when the raid took place and returned to find her ailing 9-year-old Rottweiler “Tiny,” shot dead in the head, before recovering one of her other dogs whimpering in the street the next night – dragging a taser wire from a prong that was still sticking in to him.

The woman’s boyfriend was charged with the possession of the drugs resulting in the lose of his job, extreme depression, fear, embarrassment, and emotional distress, the lawsuit says.

Prosecutors later dropped the case against him in November 2012, citing “a problem with the confidential informant.”

“I want those assholes to be charged with a felony, so they can never own guns, and never be police again.” Catalano said. “I didn’t own guns before this happened. We used to leave our doors and windows open. We don’t do that anymore… I was raised to trust police officers, you know? Officer Friendly. It’s not like that now.”

Baltimore police have said they “don’t respond publicly to lawsuits.” An Internal Affairs review resulted in no charges or disciplinary action against any of the officers involved in the incident.

The civil lawsuit is seeking $3 million in damages.