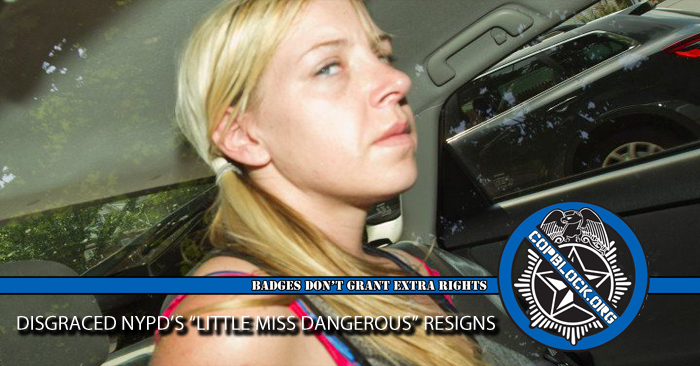 After her third arrest in only eight months, NYPD Officer Stacey Staniland has resigned from the force.  Her most recent arrest took place on July 1 after an investigation of her smashing her motorcycle into two cars in the West New Brighton section of Staten Island, cops said.  The motorcycle helmet she was wearing read, “Little Miss Dangerous.”

During the investigation, police made a shocking discovery as she sifted through her purse to pull out ID when they spotted needles, a silver spoon and drug residue, sources said.  Four and a half pills of an anxiety drug that she did not have a prescription for were also discovered in her purse.  She is facing charges for possession of a hypodermic instrument and criminal possession of a controlled substance, according to police.  She was also charged with driving an unregistered vehicle.

Her run ins with the law began in December of 2014 when she broke into the home of her boyfriend’s mother in Elm Park.  She allegedly stole the mother’s jewelry during the home invasion and then pawned the stolen jewelry.  She was charged with burglary, criminal possession of stolen property and petty larceny charges.

Her second arrest was the result of her being discovered to be under the influence of a controlled substance while on duty in May of 2015.  This took place while her case for the first arrest was still open.

All three arrests resulted in her being suspended rather than being terminated.  How  many other jobs out there can you think of where you get to keep your job after being arrested for burglary and drugs?  At least now that she has resigned we have one less officer to worry about out on the streets operating under the, “Do as I say, not as I do” mentality.