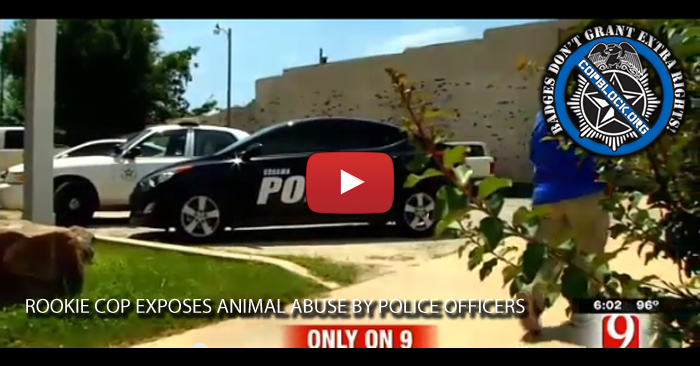 After only two weeks on the job, Konawa Police Officer Jermaine Downs has broken the “Blue Line of Silence” by exposing two officers on the force for abusing animals on the job.  The officers involved allegedly bragged about shooting and beating stray animals while they were on duty.  Downs is now considering quitting his job over the incident.  At least two officers from the Konawa Police Department in Oklahoma have been placed on administrative leave after Down made allegations against them.

The allegations come from conversations that Downs overheard as well as an account that he witnessed himself.  That incident involved the officers cornering a raccoon before shooting it and then beating it with their batons.  Officer Downs described the incident on camera with KWTV, “The animal wasn’t deceased, so they immediately – both of them – brought out their batons and hit it repeatedly until they were certain that it was dead,” Down explained.  “After they had done that, one of the officers had remarked that he had hit it so hard, he caused a bend in his baton.”

There is no doubt in my mind that Downs has now placed himself in danger of retaliation for exposing these two officers.  The Blue Line of Silence has been in place for too long and it’s about time more officers step forward and expose those that get their jollies in abusing both citizens and animals.  Hats off to this officer for doing the right thing and exposing these sick officers even knowing that he has put both his career and safety in danger.