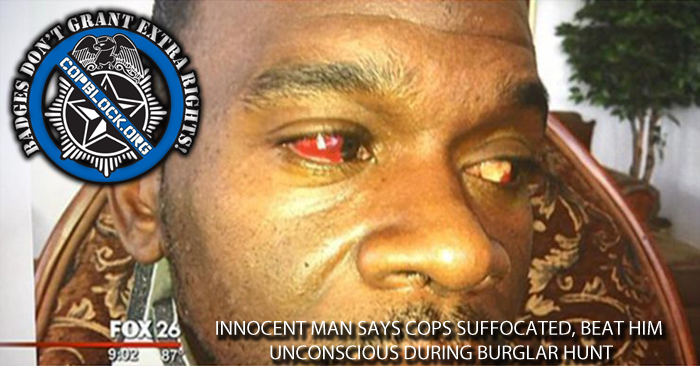 A Texas man is alleging in a excessive force lawsuit filed in Houston federal court, that Houston police officers assaulted him during a search for a burglary suspect in 2013.

36-year-old Nicolas Watson says two officers jumped out of an unmarked vehicle with their guns drawn in his southeast Houston driveway at around 2 a.m.. He was returning home from a haul as a truck driver

According to the lawsuit, one officer immediately placed Watson in a choke-hold, knocking fast-food he had just purchased out of his hands, and began “suffocating” him while the other officer kicked him in the head until he was unconscious.

The man says his vehicle was searched and he was then handcuffed and detained before being taken a block away by a HPD supervisor to the house that had allegedly been broken in to.

Watson says he was eventually returned to his home after the officers realized he was innocent, but the lawsuit also claims that despite filing a complaint with internal affairs, “no officer received any discipline for [anything] related to excessive force or false arrest and wrongful detention.”

Watson says he still walks with a cane because of the incident and can’t stand for very long. He maintains he has been unable to work since suffering eyeball hemorrhages, a concussion, headaches and muscle spasms.

Watson says despite “repeated requests” made to Houston police to identify the two officers who brutalized him, officials “stone-walled” the process. The names were not made public until Wednesday when they were entered in to the federal court record:  officer Felipe Gallegos Jr. and officer Ricardo Eduardo Perez.

The lawsuit charges that the officers violated Watson’s civil rights by assault, battery and false imprisonment and maintains they had no legitimate reason to stop him as they had no description of the alleged burglary suspect they were looking for.

“He didn’t deserve any of this, and they let him go,” civil rights attorney Randall Kallinen said.  “He did not commit a crime, [and officers] didn’t even have a description of whoever it was they were looking for. They just picked Mr. Watson.”

The city of Houston has said Watson has “failed to state plausible factual allegations” against the officers and are asking U.S. District Judge Lynn Hughes for full dismissal of the lawsuit.