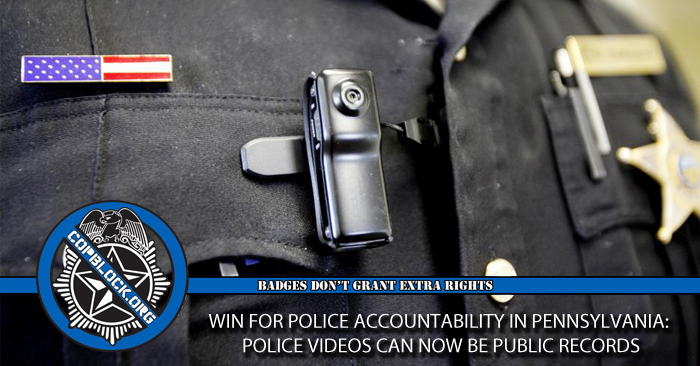 Harrisburg, PA: In what could be a serious blow to the Police’s ability monopolize witness testimonies within court proceedings, a PA state court, headed up by a 3 judge commonwealth panel, ruled that videos of police in public can be considered public record. Stating that devices such as dash cameras show how police carry out their duties, and that is “at the core” of the Right To Know Law’s ability to help people scrutinize police, and hold them accountable.

The ruling revolves around a case involving a police dash cam, but the ramifications of the case could be wider to all recordings of police in public, although, there are sections of videos that can be redacted as part of investigations. Police argued that videos at a scene that result in citations should make the video exempt from being a public record as part of a “criminal investigation”. Being granted this exception of course, gives them an incentive to give citations for one of a bevy of “catch all” statues, such as disorderly conduct.

The case involves video taken by police at the scene of an accident near state college. Michelle Grove, a friend of the person involved in the accident, arrived at the scene right as police showed up. After having read the police report, she was shocked to find that the police report of the event was very different from what she witnessed. This made her question the fairness and the accuracy of the investigation. She stated “These videos are created for the public, for the specific reason of providing accountability”

Evidently, the judges agreed with her, and ordered the release of the video, sans audio. Police argued that release of the audio would bring up concerns about the wiretap statute, and potentially violate the privacy of people on the scene, the judges also agreed with this. However, it has been ruled repeadidly that there is no expectation of privacy in a public place.

Pennsylvania NewsMedia Association lawyer Melissa Melewsky described it as an encouraging decision.
“Pennsylvanians have struggled for access to police records under the current law, so any time we see the courts coming down in favor of access, it’s a positive step,” she said.

A decision has not yet been made whether an appeal will be made to this judgment.

You can find more information on this story Here, Here, and Here