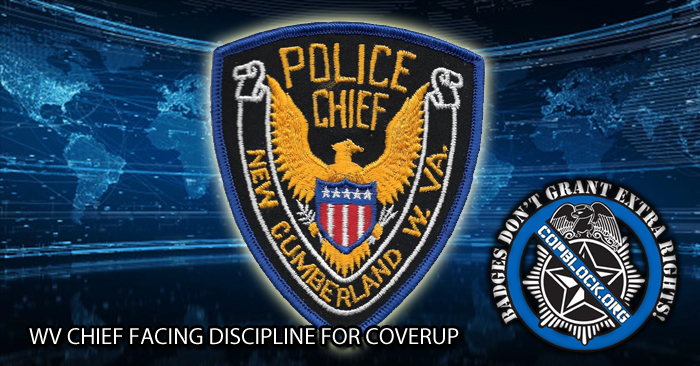 After an investigation, the Hancock County Sheriff’s Department said White had been drinking before the crash, and reportedly she was drinking at Chief Skinner’s home as well.  According to that report, the cruiser involved in the crash was hidden behind a large bush on Skinner’s property, and the front end was not visible. Skinner instructed the New Cumberland Officer to record the accident on an incident log instead of an accident report. Skinner also declined to provide a written statement about the incident. Skinner also asked if any other officers were going to come, and then asked the officer on scene “Are we good?”

New Cumberland Mayor, Linda McNeil, had this to say in a statement released on Friday, July 10,

This is a personnel matter that is being handled internally, even though the investigation had to be handled externally as it would have been a conflict of interest to have the New Cumberland Police Department investigate activities in their own department. There is a disciplinary action in place and will be served on the Chief in the near future.  This concludes the matter for the city of New Cumberland.  We are putting this behind us and moving forward.

I’m interested to know why officers continue to cover for their fellow officers when they break the law rather than doing the right thing.  What makes this even worse is that Skinner is White’s superior at the Wellsburg department.  The car crash seems to be a small piece of the puzzle in what is going on with Hancock County police.  These are the officers that are entrusted with the safety of the residents and paid with tax dollars and they’re out there getting drunk and crashing vehicles also paid for with tax dollars.

Both Skinner and White should lose their jobs over this incident.  White made the decision to get behind the wheel after consuming alcohol and placed other drivers in danger.  Skinner is fraternizing with a subordinate and covering up for her crimes.  From the statement released by the Mayor, it seems like the discipline being levied against Skinner will be a slap on the wrist.  She wants to put it behind her and move forward, rather than getting to the root of the problem.  White has only been an officer since April of 2015 after being sworn in as the first female officer ever on the Wellsburg force.  After this incident, I’m sure the residents are not all too impressed with her job performance.