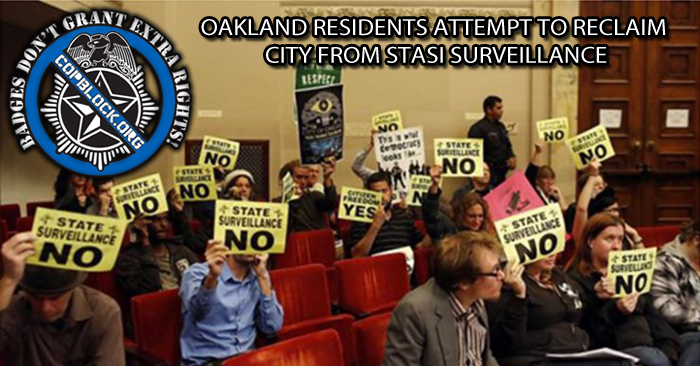 Residents in Oakland, California are attempting to reclaim their city from unwarranted spying by police.

Activists are hopeful that city officials will appoint members of a privacy advisory committee to draft a city ordinance regulating the purchase and use of surveillance equipment by law enforcement agencies.

The city took its surveillance operations to a new level during the height of the Occupy Wall-Street Movement in 2013, when police proposed to use $2 million in federal grant money to expand a surveillance program, once only utilized in the port of Oakland, throughout the rest of the city.

“This was [in response to] the Occupy Oakland movement in 2012 and in 2013,”  former civil rights lawyer Brian Hofer said. “The city’s plan was to link more than 700 surveillance cameras throughout the city, license plate readers, shot spotters and other surveillance equipment into a system where law enforcement could have consistent and real-time access to the data.”

Hofer heads up an 11-man privacy committee working to limit the surveillance back to the port of Oakland, develop a comprehensive privacy and data policy, and build awareness of the proposed expansion of the Oakland Domain Awareness Center (DAC) – the building where surveillance operations are managed by the city.

The privacy committee’s policy would require the DAC to designate a chief privacy officer, who will routinely record and report the use of surveillance technologies to the committee and city council.

Attorney with the ACLU of northern California, Matt Cagle, says making residents aware of the DAC expansion plan led to a list of seven recommendations being approved by the city on June 2.

One of those established a permanent advisory committee to review surveillance equipment purchase requests by law enforcement agencies. Another aims to develop a citywide surveillance technology ordinance.

“What’s significant here is that the new ordinance will cover all surveillance equipment regardless of whether it was paid by federal, state, local, or private funds, and [it] will cover all new models of technologies,” Cagle said.

Hofer says the ordinance will allow people who believe that they have been unnecessarily targeted by police surveillance activities to seek redress in court, request that the surveillance be halted, and have their legal fees covered if they win.

The move could make Oakland a west coast bastion for privacy advocates concerned with the rise of new and intrusive surveillance technologies like “stingray,” whose purchase and use are shrouded in secrecy by law enforcement agencies.

According to the American Civil Liberties Union, 40 out of 58 California counties were utilizing some type of surveillance in 2014.

Oakland police have offered no comment on the newly proposed ordinance.