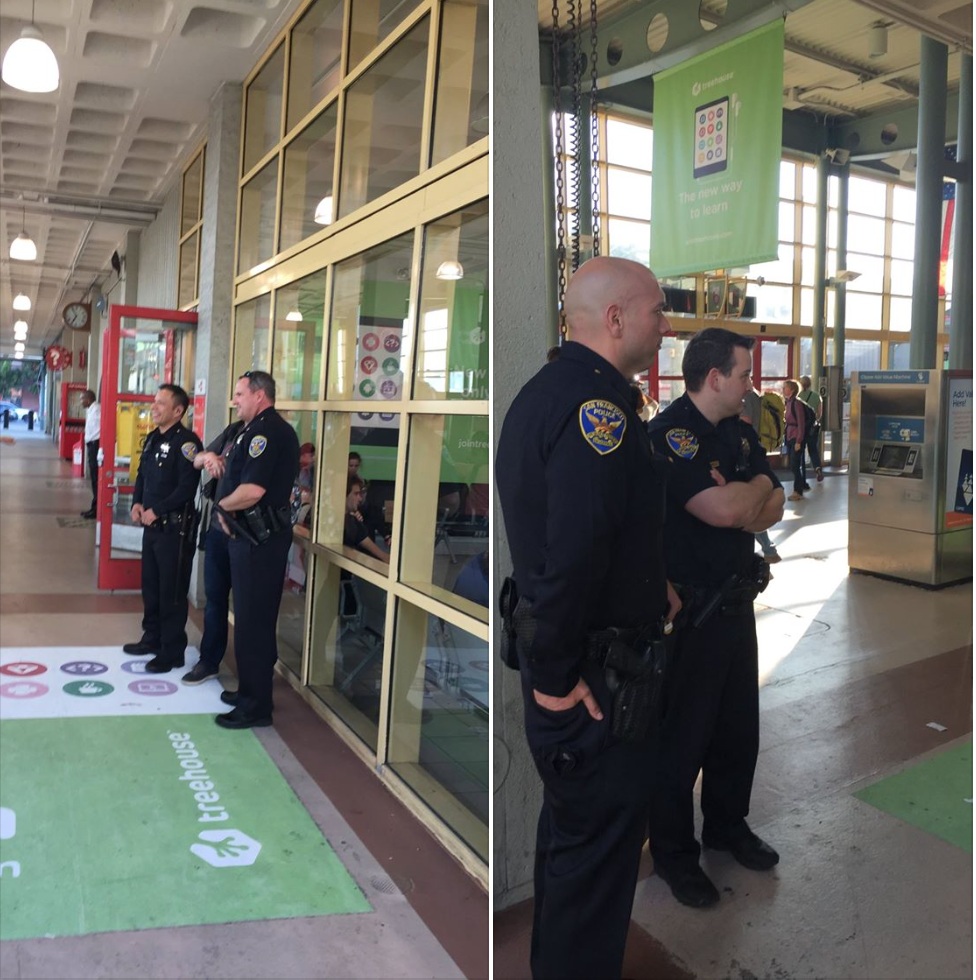 If you were at the San Francisco Caltrain station this evening (July 13, 2015) around 6:45 pm, your boarding on a southbound train may have been delayed. The southbound platform for the train to San Jose was blocked temporarily due to a situation on the incoming northbound train. If you were one of the people who was waiting to get on that train, you would have seen the following.

There was one cop–good looking, affable, questioning a man, while his partner stopped the oncoming people from getting on the train. There were two transit police standing by. The man being questioned is in his forties, reading glasses propped on the top of his head, NY Times tucked under one arm, with a soft, brown weekend bag at his feet. He has a short cropped salt and pepper beard, is dressed casually in Levis and a loose untucked collarless shirt, wearing Birkenstocks. He does not look particularly intimidating. He looks an awful lot like a tanned English Professor on the tail-end of a holiday. You might even say he looks like George Clooney–but not Ocean’s Eleven Clooney, more like the slightly overweight Clooney in Syriana. Nobody important, impressive, or even particularly interesting – just a normal middle-aged dude coming back from a weekend.

The man seems slightly overwrought. He is explaining to the officer that he bought a ticket in Sunnyvale down the line–and the ticket hasn’t got the right fare. The conductor (who is also standing by with two transit reps) asked for his ID to cite him three hundred ninety dollars–and he refused to give her his ID. And so on. A person standing ten feet away could hear the man saying,”Look, I made an error buying this ticket, I am happy to pay the difference but I am not going to be fined three hundred and ninety dollars, I am not going to give you my ID, and I will not be detained or harassed.” They go back and forth. Except now, there are not just two cops–there are three of them, and then suddenly before anyone can say a thing, there are FIVE cops on the platform. The man, still not visibly upset, turns to see the police as they create perimeter around him and says, without a shred of irony…

That English professor-looking, Birkenstock wearing, slightly overweight, mild-mannered, Clooney-esque 44 year-old man is none other than little old me.

The five police officers and two transit-security representatives escorted me through the fairly large assembled crowd of now delayed passengers (some of which yelled, “Taze him!”) to pay the difference in fare. What no one has cared to tell me is why FIVE (uniformed) San Francisco Police Officers were needed to make sure I paid the fare difference, which was exactly four dollars.

I will tell you why.

Because this is how you intimidate the public. This is how you make an example of a person who commits a minor infraction to demonstrate that police power can be effectively deployed anywhere, on anyone, at any time and for any reason. This is what happens when the priorities of the police have drastically shifted from protection to intimidation.

Why else would it be necessary to send five cops to check out a non-descript guy who made a mistake on his ticket fare for a train home after a sunny weekend in the suburbs?

Let me be clear. I have no problem with cops and all those who uphold the rule of law. None whatsoever. In fact, I’ve never had a single problem with them. However, I now understand a few things.

Consider these statistics for a moment:

So I’ll ask again, why do five cops need to respond to a guy who paid the wrong fare for his train ticket?

Is it because after several weekends of sun I look like a person of dubious national origin?

Is it because I refused to provide an ID or be detained?

Is it because the city feels train-ticket dodgers are such a BIG problem that it needs to be addressed with a pretty impressive show of law enforcement?

Or is it because this is exactly how things go wrong?

Imagine instead that a young, uneducated person down on their luck, drug-addled or addicted with one strike on his record could possibly become scared, intimidated and run, or how a person of dubious national origins might get flustered and flee, or become irrational? When law enforcement behaves this way toward the public, they gain a reputation for the wrong reasons while the possibilities of a disaster happening are virtually endless. People do not feel safe when five cops show up to ask you if you paid the correct train fare. People get scared.

Anything could have happened on that platform. What if I didn’t know how to handle myself, or if I didn’t know my rights? Folks, I’m not one for conspiracy, but sending out five cops for a fare difference issue smells a whole lot like the beginning of something terribly rotten.

Does anyone want to explain to me what the hell is going on?