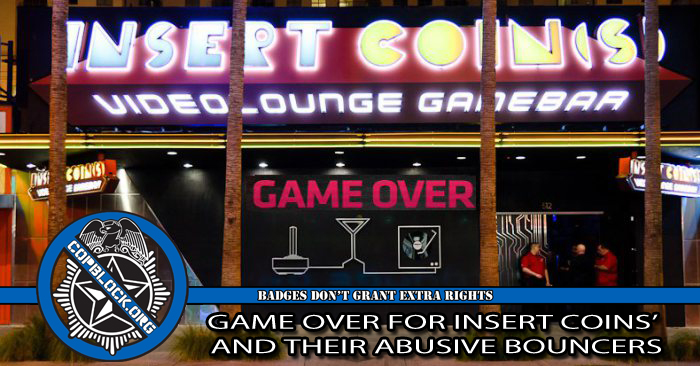 Apparently, Downtown Las Vegas bar-hoppers aren’t quite as quick to back abusive bouncers as Chris LaPorte, the owner of Insert Coins, was after a video (embedded below) of a man being beaten out front of his Fremont Street bar became public. Citing “a rapidly changing DTLV business environment” and the tough economy, it was announced July 9th that the previous night would be the last one for Insert Coins.

That was later revised to characterize it as a temporary closing, but don’t hold your breath waiting to play shitty, broken video games and buy overpriced drinks after paying an inflated cover charge in Las Vegas again. What closes in Vegas stays closed. As was reported here at CopBlock.org as well as other places, such as PhotographyIsNotACrime.com, on February 12th there was an incident involving bouncers from several “Fremont East” bars. Bouncers from Insert Coin(s) initiated a confrontation by demanding a man move from the public sidewalk in front of their location, even though they had no actual authority to do so. When that man refused three of those bouncers knocked him to the ground and punched and choked him for a full minute after he was already down.

While that was going on a passerby began recording it with his cellphone. Another bouncer from the Vanguard, which is located next door tried to prevent him from filming the beating. Finally, yet another bouncer from the Griffin crossed the street, grabbed his phone, smashed it on the ground, and then assaulted him, also.

Even though you can very clearly see the bouncers assaulting the man and not stopping even after he’s down on the ground and defenseless in the video, LaPorte refused to acknowledge they were wrong and even stated that he watched surveillance video of the altercation and that he “backs my guys.” He maintained that stance even after the Griffin actually did the right thing and fired the bouncer that broke the witness’ phone. Instead, LaPorte comically implored everyone to “get the whole story before believing what you see.”

Not surprisingly, some people in the community weren’t so willing to close their eyes during that video and blindly back Chris’ guys. A series of protests organized primarily by Nevada Cop Block and Southern Nevada Watchdogs, a local grassroots organization based in Las Vegas, followed over the next few weeks. Since it was claimed that the “transgression” of the man who was beaten was dancing on the sidewalk in front of their bar, one of the biggest and most publicized of the many held was dubbed the “Dance, Dance Revolution.”  That and others, including numerous impromptu protests involved the use of chalk messages and showing potential customers the video as they approached the entrance to Insert Coins to draw attention to the bouncers’ actions.

If they were more specific, they would say that their security guard brutally beat a homeless man for no reason and the public stopped going there (after weeks of protests). The economy is still kinda crappy in Vegas and the bloom is just about completely off the Zappos rose in “the #DTLV.” So, I don’t really doubt those factors also played a part in Insert Coins getting unplugged. But you know what doesn’t help that when you’re a customer service based business? A giant PR disaster that’s so badly handled it turns into a month long public denouncement of your business. Even an eleventh hour attempt to donate to a group that gives food to local homeless people wasn’t enough to make that stink go away. I’m sure those bouncers were glad Chris LaPorte backs “his guys,” even when they violently attack people on video after one of them started a fight with that person (for no good reason). The rest of the former Insert Coins employees might not be so glad that they are all out looking for a job (during that crappy Vegas economy) because of the actions of three individuals, who were pretty clearly wrong regardless of what angle you watch them beat and choke a guy laying on the ground for over a full minute from.

It’s also a bit of an example of what might happen in response to all the police brutality and lack of any accountability at all, if a government mandated monopoly on police services didn’t remove any options people have for law enforcement and protection outside of the one committing all those beatings and murders then covering up for it.

**Disclaimer** This example of a very successful result to a chalk protest was not intentionally timed to promote the annual “Chalk the Police State” Day protests scheduled for July 18th. The fact that the closing of Insert Coins was announced the same day as the post for Chalk the Police State Day 2015 was published is pure coincidence (or was it).**