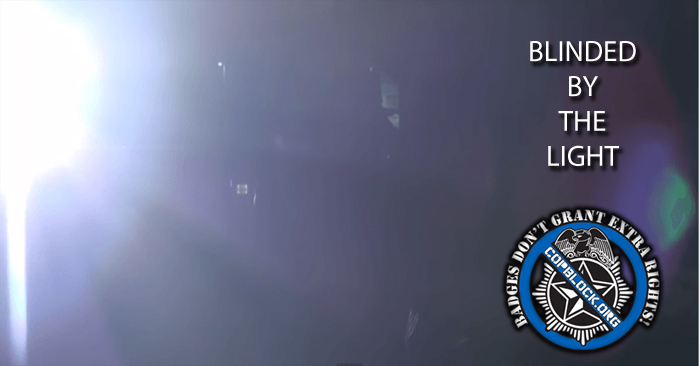 It seems the police have found a new way to interfere with photographers that are legally filming police activity.  We have seen it before in videos, but there seems to be a growing problem in which police officers are shining their lights into the face of the photographer and the camera.  This is a clear violation of those photographers constitutionally protected First Amendment rights.  I can understand if it is night-time and they see someone in the shadows and want to ensure that the person is not a threat by briefly shining their light in that direction to see who is standing there.  The actions of the officers in the two videos above go too far.

The two videos uploaded to YouTube by The Battousai demonstrate how far these officers go to harass and intimidate photographers that are clearly engaged in legal activity.  He shot the videos at two different traffic stops in Round Rock, TX.  Both times the same officer, as well as other officers, shine their lights in the direction of the camera in an attempt to interfere with hims ability to record their stops.  In the second video they use the strobe settings on their flashlights.  Many states have laws against the use of those strobes due to the health hazards that exist for people, such as those with epilepsy, in which the strobe effect can induce a seizure.

At the end of the second video, Battousai confronts one of the officers and requests his name and badge number.  The officer lies and tells him that he

does not have a badge number.  Batt called the department later on and got the very badge number that the lying cop said didn’t exist.   The officer is Officer Robert Saucedo of the Round Rock PD in Texas.  At one point in the second video, Batt is able to move positions and block the light coming from the officer’s car to get the shot.  His quick thinking allowed him to continue to document these officers.

Below is a video I shot over this past weekend where an officer was being an ass and shining his light at me.  His actions were not nearly as extreme as the officers in Batt’s videos above, but it goes to show that more and more officers are starting to play this game.  I did not have my light with me on that evening, but I normally carry a 1,000 Lumens Lensor Tactical light that puts many of their lights to shame.  I just turn it on and flash back at them and they get the point and turn their lights off.

Remember that photography is not a crime, yet many officers will do anything to interfere with your rights if you let them.  If this happens to you, be sure to file a complaint against the officers involved, and remind these departments that filming them in the course of their duties is perfectly legal.