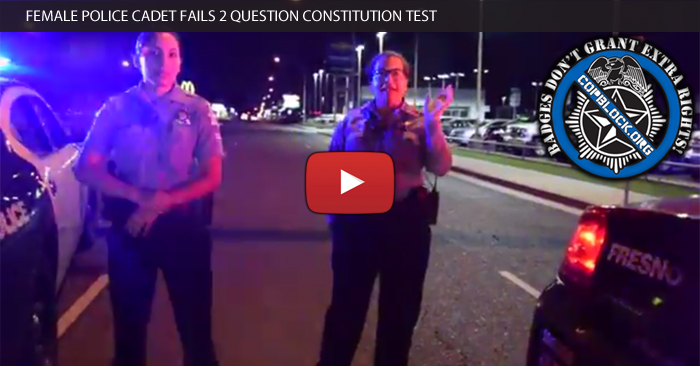 While cop blocking the annual cruise night in Fresno I decided to test the knowledge of the next generation of law enforcement in Fresno. The police cadets are often used to create roadblocks in order to hinder free traffic flow down Blackstone due to the ‘cruisers’. A female cadet offered to answer questions, so long as it wasn’t on camera, because she claimed to be self conscious. I didn’t have an audio recording device so we agreed that I would point the camera at the ground.

I asked her how well she understood the U.S. Constitution, and she confidently replied that she was knowledgeable and had a political science degree to prove it. I didn’t expect her to rattle off an entirely accurate definition of the amendments, but only to give me an overall premise.

I started off by asking for an outline of the 6th amendment.

In all criminal prosecutions, the accused shall enjoy the right to a speedy and public trial, by an impartial jury of the State and district wherein the crime shall have been committed; which district shall have been previously ascertained by law, and to be informed of the nature and cause of the accusation; to be confronted with the witnesses against him; to have compulsory process for obtaining witnesses in his favor, and to have the assistance of counsel for his defence.

She stuttered before saying, “I know it.” Then it got awkward for a couple seconds and she demanded that we stop.

I then gently tossed her a softball about the 4th amendment.

The right of the people to be secure in their persons, houses, papers, and effects, against unreasonable searches and seizures, shall not be violated, and no Warrants shall issue, but upon probable cause, supported by Oath or affirmation, and particularly describing the place to be searched, and the persons or things to be seized.”

She claimed to know the 4th amendment as well, but stated that she couldn’t discuss it with me. I was somewhat confused about that, considering she offered to answer questions so long as the camera lens was aimed at the ground.

This cadet doesn’t know the rights of the individuals she will soon ‘protect’ and ‘serve’, and even worse, she shamelessly lied about it multiple times right on camera.

If these are the people who will be able to make decisions about another individuals freedoms and liberties, maybe you should question your need for a violent state nanny who is only able to exist as a parasite on society which leeches their existence off of the hard working individuals in productive society, while simultaneously abusing those hosts.

How does that old saying go? “Don’t bite the hand that feeds.”