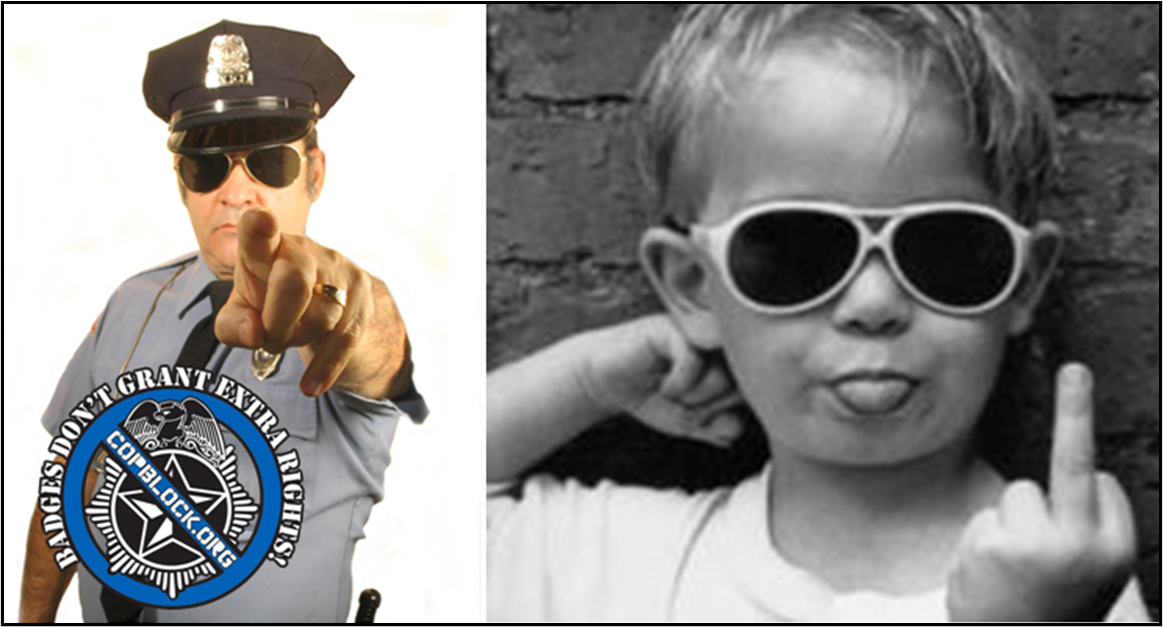 Is it any wonder why children are bouncing off the walls? Cant pay attention? Have become nihilistic and uninterested? They cant do anything!

From an early age, young people are confused by inconsistencies pertaining to the scope and depth of their rights. They are told they live in a free country but in the same breath they are told they have no rights. Children cant contract, they cant work, they cant vote and they are conscripted into a state education system most would voluntarily choose to not participate in.

Again, is it any wonder why children exhibit so many behavioral problems these days?

Just to be clear, I am not arguing that children be allowed to get drunk. The question arises however, as to who should have the power to make such decisions. Where is the locus of control? Does it lie with parents or does it lie with the state?

Obviously the former but to illustrate one of the many legal contradictions facing children, consider so-called “adult time for adult crimes” laws.

Tried As An Adult Adolescent teens cant even enter casinos. In at least 10 states, 17-year-olds cannot legally have sex with 20-year-olds. If they commit a violent crime however, they are tried as an adult. In fact, in most states, a 10-year-old charged with murder can be tried in adult courts and slightly older children can be prosecuted as adults for virtually every other crime.

This blaring contradiction may seem obvious to some, but if you are looking for consistency and rationality from the state, you will be routinely let down.

During juvenile violent crime spikes in the 1990s, it became easier to try children in adult criminal court. Between 1992 and 1997, 44 states and the District of Columbia passed laws facilitating the transfer of juveniles to the adult criminal justice system.

It is estimated that around 200,000 children are tried as adults annually with 10s of thousands being convicted. According to the Equal Justice Initiative, nearly 3000 children as young as 13-years-old have been sentenced to life imprisonment without the possibility of parole, typically without any consideration of their age or the circumstances of their crime.

According to the Campaign for Youth Justice:

On any given day, nearly 7,500 young people are locked up in adult jails. Currently, 39 states permit or require that youth charged as adults be held before they are tried in an adult jail. In some states, if they are convicted, they may be required to serve their entire sentence in an adult jail.

The organization also points out:

At the other extreme, we know that some young people incarcerated in adult prisons will expect to spend the majority of their lifetimes be hind bars. Human Rights Watch reported in 2009 that an estimated 2,600 people were serving life without parole for crimes they committed while under age 18.

As with most things government attempts, the opposite of the desired effect is the outcome. Studies consistently find that juveniles tried as adults serving time in adult prison facilities commit more crimes after they are released than minors who remain in the juvenile justice system do.

Studies in some states have even found that during the height of the “adult time for adult crimes” fervor, youths transferred to adult prisons had approximately 30 percent higher recidivism rates.

What a ridiculous double standard. If children are going to be receive the same punishment as adults, they should enjoy the same “rights” they have as well. Much can also be gleamed while examining draconian truancy laws. Truancy is defined as any intentional unauthorized, “illegal” and “not excused” absence from compulsory government indoctrination centers. In other words – absences caused by students exercising their own free will.

In the United States, truancy laws are enforced by law enforcement officers who write fines ranging from $250 to as much as $500 for each unexcused absence.

Many states provide for the appointment of local truancy officers who have the authority to arrest habitually absent youths and bring them to their parents or to the school they are supposed to attend. Many states also have the power to revoke a student’s driver’s license or learners permit.

Recently, federal officials said in states like Texas, children missing school have been handcuffed in court, denied access to an attorney and made to pay exorbitant fines.

In 2013, three advocacy groups filed a federal complaint regarding Dallas county truancy courts, which at the time, were sending police officers to school campuses to arrest and detain students who missed truancy court dates.

In Berks County, Pennsylvania, more than 1,600 parents have been jailed since 2000 for failure to pay truancy fines.

More than 150,000 truant students and their parents are incarcerated annually with over 1,000 truant children and teenagers being removed from their homes each year and placed in foster homes, group homes, or juvenile detention centers.

After the federal probe into Texas’ compulsory education laws that were sending about 100,000 students a year to adult criminal court, Gov. Greg Abbott signed into law a measure in June, which will decriminalize unexcused absences when it takes effect on Sept. 1.

The state brought in a estimated $10 million from court costs and fines related to truancy in the 2014 fiscal year, but Gov. Abbot’s measure will make Wyoming the only state left in the country that sends child truants to adult criminal court for prosecution. Other laws designed to look after the welfare of children that have the opposite desired effect include, yes, child labor laws.

The main law regulating child labor in the United States is the Fair Labor Standards Act – which was curiously enacted in 1938 during the Great Depression at a time when the extra income for families made the literal difference between life and starvation.

Additionally, many minors are required to attain work permits from the government to legally engage in labor.

Why shouldn’t teenagers be allowed to work if they want to? I know this question conjures anti-capitalist visions of 6-year-olds forced to work in mines and quarries but the reality of the situation is actually quite different.

To reiterate, it is only because of the wealth produced by the free-market system that children no longer have to work, not government benevolence. Decried by socialists and “progressives” as “cruel and inhuman,” free-market capitalism didn’t create child labor – it ended it.

In fact, during the years prior to the passage of federal child labor laws, only 6.4 percent of children between the ages of 10 and 15 were actually employed, with 75 percent of those working family agriculture jobs – which government still allows exemptions for.

So in other words, child labor laws did almost nothing. Well, they didn’t do nothing. As Woods points out, they actually harmed.

As the great Austrian economist Ludwig von Mises also relates in his 1949 treatise Human Action, the industrial revolution represented an increase in peoples standard of living, not a system of oppression inflicted on the populace by monocled monopoly men.

[low as factory wages were initially,] they were nonetheless much more than these paupers could earn in any other field open to them. It is a distortion of facts to say that the factories carried off the housewives from the nurseries and the kitchen and the children from their play. These women had nothing to cook with and to feed their children. These children were destitute and starving. Their only refuge was the factory. It saved them… in the strictest sense of the term, from death by starvation.

Well, not unless they want to work for the state, the federal government says. That’s right, federal law exempts children from child labor restrictions at any age if they work for a state or local government – and there are no hourly restrictions.

You may think it harsh to say, but school is not for everyone. If someone is not particularly interested or does not preform well in academics, perhaps they are better served getting a job at a young age, developing skills, and moving up the latter to more profitable employment.

This certainly was the view in my small Western North Carolina community growing up, where students routinely dropped out of high-school to pursue careers in manual labor. Because of state laws however, many of my classmates were forced to endure years more of school than they otherwise would have.

My friend David for example, wanted to drop out and get a full-time job when he was 14 but NC law said that he had to be 16 years of age to abandoned their compulsory indoctrination system.

The day he turned 16, he dropped out, and had his GED and a full-time job as a potters apprentice within 2 weeks. David is now a highly successful artisan that makes fine ceramics and glass.

So, why shouldn’t David have been “allowed” to do that when he was 14? Isn’t that the exact type of behavior governments should be encouraging?

Ofcoarse, but to the state, it is better that children endure 16 years of socialist propaganda(4 year degree), join the military, or their parents apply for welfare.

Jeffery Tucker points out in his essay, The Trouble With Child Labor Laws:

The political class thinks nothing of legislating on behalf of “the children,” as if they are the first owners of all kids. Child-labor laws were the first big step in this direction, and the rest follows. If the state can dictate to parents and kids the terms under which teens can be paid, there is essentially nothing they cannot control. There is no sense in arguing about the details of the law. The critical question concerns the locus of decision-making: family or state? Private markets or the public sector?

Why should federal overseers, who know very little about hard work, have authority to determine who and when someone can engage in a voluntary exchange of labor for capital? In a free and non-coercive society, these would be decisions made on the behest of parents and communities – not the all-knowing nomenklatura.

Child labor laws should be repealed so that minors have the opportunity, if they so wish, to develop the necessary skills to survive in a struggling economy already made poor by government intervention.