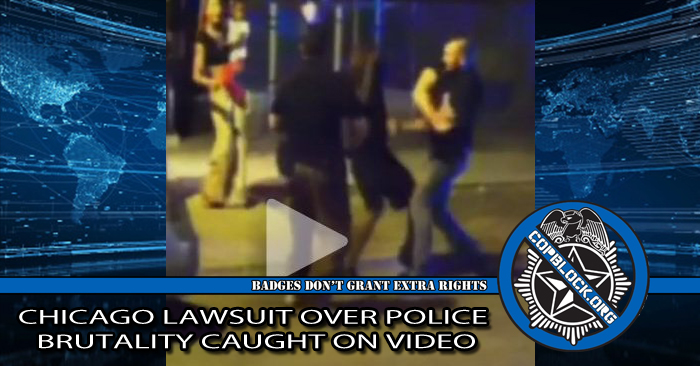 On Thursday, July 9th Lisa Simmons and her son, Jeremiah Smith, filed a lawsuit against the Chicago Police Department over an incident from last year in which they can be seen on video being beaten by Chicago cops. The video shows Smith being hit by a police officer and Simmons being slammed against a police car after she complained about Smith being harassed by that officer. Also in the video, the cop who assaulted both of them can be seen threatening others with a baton, even though no-one has made any sort threatening act toward him.

Moments later, that officer used the baton to strike Smith very hard in the side of the head after yelling at and grabbing him. Afterwards, the officers claimed in their police reports that Smith had attempted to hit the cop who struck him. That can pretty clearly seen not to be the case in the video.

Rahsaan Gordon, the lawyer for Smith and Simmons, maintained in an interview with CBS2 News in Chicago that Smith didn’t even so much as threaten any of the police officers or in any other way justify being assaulted:

In the video, police arrive on the scene of a block party at 15th and South Christiana. An officer approaches Jeremiah Smith, yells at him and hits him so hard with his police baton Smith’s white hat flies off his head.

“He never uttered a word to him,” Gordon says.

In the video, a woman holding a baby, screams and then covers her mouth after seeing Smith, stumble to the ground.

“This is a perfect glimpse into how even a small child can see some of this brutal violence that is being issued by these people who are sent into our communities to serve and to protect,” Gordon says.

Both Smith and Lisa Simmons have filed a lawsuit against the city and the police. Simmons is a woman seen getting arrested in the video.

Gordon says police fabricated information in a police report saying Simmons was drinking and that Smith attempted to hit the officer.

“Anyone with any level of decent vision, can see that’s simply not true in the video,” the attorney says.

Although it’s not clear why exactly police showed up, ABC7 News in Chicago stated the group of neighbors were holding the block party to celebrate two residents of that neighborhood being signed to a recording contract.

According to a Chicago police spokesperson, the incident is being “investigated” by their Independent Police Review Authority. I’m sure they’ll get right to the bottom of this.