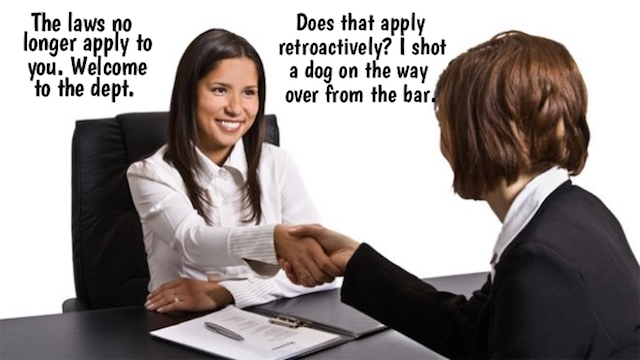 Massachusetts Civil Service Commission report findings have indicated that the process used to hire officers by the Methuen Police Department favored those individuals who openly admitted that they would abuse their police powers if given the opportunity.

A questionnaire used by the department asked applicants if they would arrest their friends, family or fellow officers if they caught them driving drunk while on duty. Interviewees who said that they would not arrest this group of people were given a higher score than those who did not.

The department claims that the question was intended to weed out those who were just telling them what they wanted to hear. Admitting that you would not apply the law equally to all individuals, regardless of their relation to you or position as a police officer, was considered being honest.

This seems to suggest that the Methuen Police Department believes this sort of thing was the normal conduct of its officers. And perhaps it is. A report from the same commission that investigated these unethical hiring procedure found that this kind of behavior was a widely practiced ‘professional courtesy’ that came as a perk with the job.

“Every police officer who testified before the commission testified that the routine and customary practice when a stop is made on a fellow police officer, is to show professional courtesy and not call in the stop.”

However, this whole ordeal reveals nothing new, least not for those paying any attention to police misconduct in their communities and at large. Everybody pretty much intrinsically understands this to be the case already. Police have unspoken, yet far-reaching, privileges which create an imbalance in application of the law. Not only do police rarely police themselves, but they also tend to go much easier on friends, family members and their most rabid supporters.

This has always seemed to be one of the motivating factors in the complex psychology of copsuckers. A sort of savior worship on one hand, and an ‘if-ya-can’t-beat-em’-join-em’ on attitude on the other. Unfortunately, many people who began as misguided supporters of the increasingly horrifying police state later became ardent critics after the protections they thought their associations or delusions granted them were yanked out beneath them in tragedy.

Badges do grant extra rights, though on paper or in theory they shouldn’t, it continues to happen every day and in almost every community. Add this to the differences in treatment between socio-economic groups and you will begin to see the bigger picture. This is not law enforcement. This is state sanctioned inequality by use or threat of aggression.

The state and its mercenaries have far more power and momentum than those of us desperately trying to prevent the eventual endgame such a scheme logically requires- The total subjugation of individuals to the state via the force employed by consenting men and women who serve the ruling class at the expense of our resources, liberties and future.