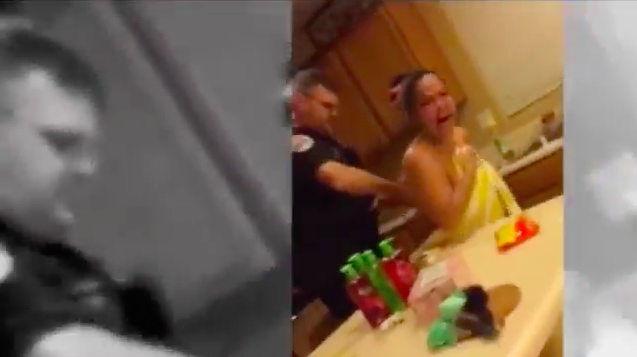 A Chandler, Arizona officer has retired amidst an investigation into an incident in which he illegally entered the home of a naked woman and cuffed her. The scene after his entry was caught on cellphone cameras by the woman and her daughter, as seen above.

Officer Doug Rose was responding to a call about a potential domestic disturbance when the occupants of the home felt he began to get aggressive. At this point Esmeralda Rossi decided it would be a good idea to begin filming the encounter. She was right.

After she closes the door to fetch her phone, Rose forcibly enters the woman’s home, an act that has been determined to have been outside of the law. Rossi had just gotten out of the shower and was garbed in only a towel.

Rose claims that the woman became combative, which can generally only be expected of someone whose home has just been broken into by an uninvited intruder with no right to be there. In response, the officer escalates the situation, wrestling with the naked woman and eventually placing her in handcuffs, amidst a litany of threats.

At the end of the encounter, the woman was not even charged with any crimes.

The investigation revealed that Rose also failed to record the incident with his body camera, as well as not documenting the full situation.

The second officer on the scene, commendably, reported Rose’s actions to their supervisor immediately following the encounter.

Rose is no longer employed as an officer, although he has not faced any legal consequences for his behavior.

Rossi has decided to file a civil suit against the department for the violation of her dignity and civil rights.

The officer here displays the sort of attitude that has become all-too-common amongst law enforcement officers. ‘Comply or else, I am the law.’ Little nightmares like this happen all too often, yet often get buried in the stories of my more serious police abuse. As much as police and their supporters like to blame accountability organizations like CopBlock for the waning support for law enforcement, nothing we say, write or do could ever be as damning as the common horrors committed by police themselves.