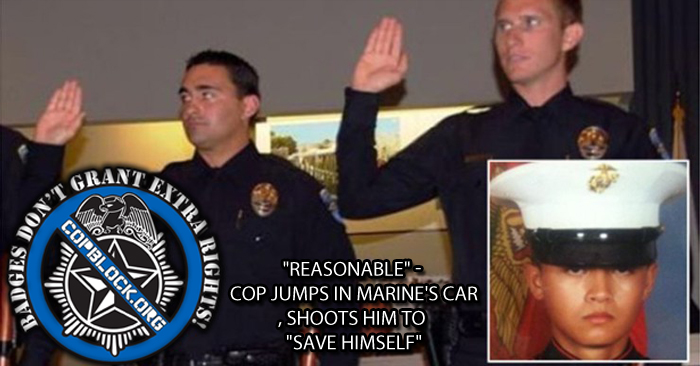 California police argued in federal court this week, that two officers acted “reasonably” when one of them dove into the window of a mans car and fatally shot him after the other fired rounds as well. (See previous post on this incident by Ademo.)

The incident occurred on the bottom floor of a downtown public parking garage when officer Nordman tried to stop DeVillena’s Chrysler for drunk driving by jumping in the passenger-side window with his gun drawn after the man ignored officers’ commands to stop.

In testimony coming in response to a lawsuit filed by DeVillena’s family, officer Heron claims he did not see Nordman leap through the window and assumed he had been pulled inside, before he opened fire on the vehicle in a effort to save his partner.

Nordman then opened fire as well, shooting DeVillena at point-blank range in the torso, to “save himself,” he claims.

When asked why he jumped into the window by investigators, Nordman responded, “[to] make the driver stop the car. He didn’t seem like he was gonna… tak[e] me seriously enough – me being outside the car and telling him to stop – so I figured I’d get inside and make him stop.”

Nordman also now asserts that he jumped into the car to avoid being struck – a claim not made until the filing of the federal lawsuit.

Officials with the Palm Springs Police Department say the officers acted “appropriately” because, if DeVillena had kept driving, Nordman’s legs, which were hanging out of the window – would have been crushed by concrete pillars in the parking garage.

“Under the rapidly evolving events confronted by the officers, their fear that DeVillena would hit and hurt or kill someone was objectively reasonable,” police said in court documents.

They are asking for full dismissal of the DeVillena family’s lawsuit without trial, and claim Nordman and Heron were forced to make a split-second decision in a life threatening situation.

Law enforcement experts say however, that the incident was an overwhelming case of “officer-created jeopardy,” initiated by Norman himself, when he unwittingly dove into the car.

“At the time the officer pulled the trigger, he may have had a reasonable fear for his life,” University of South Carolina deadly force expert Geoffrey Alpert said. “But with that said, it was his actions that created the jeopardy.”

Nordman and Heron have been cleared of all criminal wrongdoing in the incident and have received no disciplinary action from the department despite an internal review.