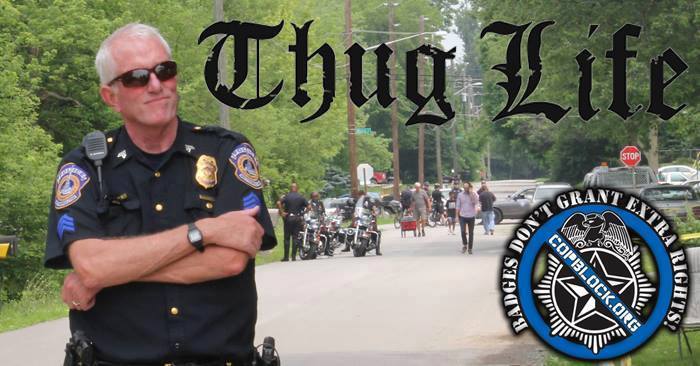 In a day and age when police misconduct is at an all time high, and accountability is a laughable concept, the Maryland Court of Appeals, in their unequalled wisdom, has declared the internal records of publicly paid employees, relating to police misconduct will no longer be disclosed.

The concept the robed overlords decided upon, is if the slaves they rule over have a right to know how government enforcers are disciplined. In a 5-2 decision the Great and Powerful oz… err… I mean the noble and virtuous mumu wearing sociopaths, sitting up on their blood soaked high horses, have dictated that the law exempts personal information (which otherwise is a matter of public record) from disclosure and does not differentiate between a “sustained” or an “unsustained” complaint.

In 2009, Teleta Dashiell lodged a formal complaint with her local protection racket (aka Police Department) after Sgt. John Maiello left his contact information on her answering machine. The violent racist was rather careless with his phone and never ended the call which led to Teleta recording John refer to her with a racial slur.

Her response from the bureaucrats, which she waited several months to receive, was that her claim was sustained and appropriate action had been taken. But alas, the self-righteous bastards refused to divulge to Teleta any details about their presumed investigation, let alone what disciplinary action was taken.

The black-robed masters justified their complete lack of transparency by claiming the disclosures would affect all of their gang members, not only the enforcers. They also claimed that mandatory disclosure findings would encourage immoral behavior by chilling the disciplinary process and making revenue generation supervisors less inclined to perceive actions as misconduct.

In other words, sit down, shut up,and comply or die slave. If the process of disciplining government employees is hidden from the public it incentivizes greater levels of deceit, by creating a market for lies.

Stand up, speak out. Question authority and refuse obedience.