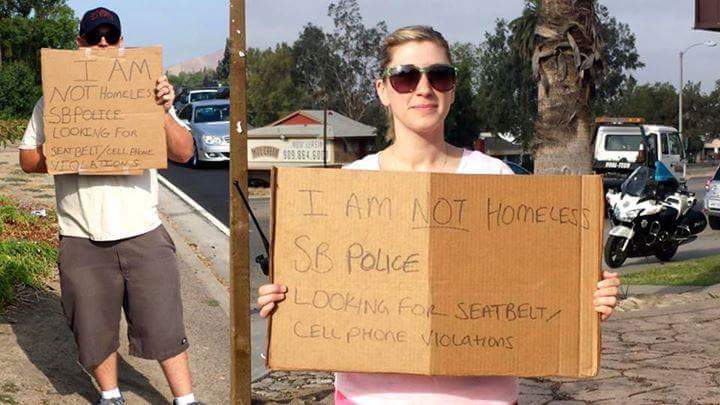 Well well, it seems the bangers in blue have a new twist on an old tactic. The next time you come up to a stop light, and panhandlers are around, you might want to double-check your seatbelt and put your phone down. Cops are impersonating homeless people, to entrap you, and extort money from you for violating their sacred edicts passed down by the benevolent overlords.

This technique, used by at least two different police departments, is a clear-cut example of double standards in play. If you have a shiny badge you can pretend you’re anyone you want, as long as you are working for, and injecting revenue into the state coffers. You just make sure you never dress up as a cop, because that’s a felony and you can easily go to prison for a long time

One operation in Vernon, BC, in which Cpl. Mark Taylor was lurking around a street corner for at least an hour, netted 11 extortions at $167 a piece, for a total of $1,837 an hour. Now if your average panhandler pointed a gun at you while you were sitting at a street light and demanded money from you there would be a national outcry. Since these violent authoritarian welfare whores have the illusion of legitimate authority behind them, it’s completely acceptable by the majority of individuals. Hell, some of the brain-dead, ignorant tax cows passing through that trap actually gave him a thumbs up, as if to say “great job there buddy! You keep stealing from people, I like it.”

Perhaps the most insidious aspect of these deceitful and disgusting tactics is that it will have a chilling effect on spontaneous charity. I would imagine people will be even less inclined to interact with someone walking around with a sign that is down on their luck, knowing that in doing so they may end up having money demanded from them or face incarceration in a rape cage. At least, most panhandlers don’t use violence.